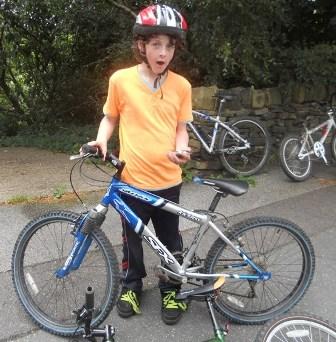 Dozens of disadvantaged young people were given a smile on Christmas Day, thanks to a community project in Yorkshire which handed out over 170 refurbished bicycles to poor families.

Streetbikes, in Milnbridge, spent the year collecting the bikes - bringing the total they have given away over the last six years to more than 6,000.

But Gill Greaves from Streetbikes told the Examiner: “It’s been our busiest Christmas so far.”

The project aims to improve the health and wellbeing of disadvantaged families - and can be referred to Streetbikes by local authorities or seek them out themselves.

The bicycles come from donations, as well as council recycling centres where tip staff look out for bikes and put them on one side. 35 volunteers work to refurbish the bikes and allocate them.

When a child outgrows a bike, it can be returned and replaced.

The charity said that in the last week a couple from Cleckheaton walked 10 miles to Milnsbridge to beg for bikes for their son and daughter, aged six and eight.

Volunteers, who were touched by their dedication, arranged delivery of two bikes and drove the couple home.

“It makes it all worthwhile when you can help families who are really struggling,” said Gill.

“I have delivered bikes to houses with no furniture nor nothing. You wouldn’t believe these sorts of places exist in Kirklees today.”

Streetbikes said: “We aim to address the issues of getting more people to use bikes as a mode of transport and for leisure at grassroots level.

“Our bicycle recycle scheme is delivered by asking  local residents and the council refuse sites to donate unwanted bikes to us.  These are then given an overhaul by qualified mechanics to get them into full working order so that they can be donated back into the community.

“We gave 5000 bikes up to May 2015 which we donated to members of the community who are not in a financial position to buy a bike/bikes for family members who are trying to address health and fitness issues.

“We aim to encourage families to introduce regular cycling activities into their lives which will potentially encourage younger members to continue for years to come.”