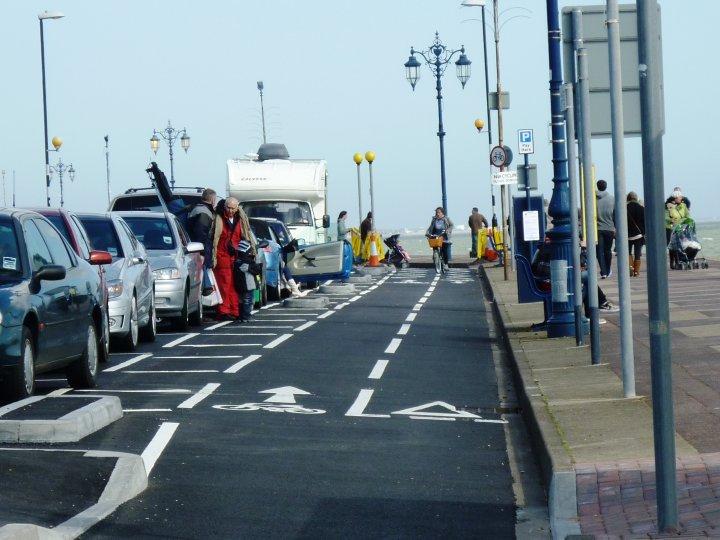 Woman injured after stepping into cyclist's path ...
by Simon_MacMichael

The seafront cycle lane in Southsea that has polarised opinion in the South Coast resort is back in the news after a female pedestrian was reportedly taken to hospital with head injuries after apparently walking into the path of an oncoming cyclist.

One witness to the incident, John Whitfield, quoted on the website of the local newspaper the Portsmouth News, said: “As a motorist and a very keen cyclist I can see more incidents happening. All that the city council has done is halved the amount of parking spaces between Eastney and South Parade Pier, and as a cyclist it has proved that the cycle lane is not guaranteed safe to use.

He continued: “After this accident I will not use the cycle lane. I will either use the pavement - and I don't care what people say - or even better not go to Southsea but Hayling Island instead, which is a great pity.”

Alison Pople, who also saw the accident described how she had told her husband that the bike lane was “an accident waiting to happen” as they parked their car shortly before the collision took place.

She added: “'What the city council has done, in effect, is to allow parking down the middle of two roads.”

Last week, we reported how a Liberal Democrat member of Portsmouth City Council and parliamentary candidate said that he believed the bike lane, which was approved last November by the council, which his party controls, needed to be rethought due to safety concerns.

In a comment on our story, Jon Spencer of the Portsmouth Cycle Forum, also known as Pompey Bug, set out the reasons why he believed those safety concerns were being inflated by opponents of the bike lane and a proposed extension to it, including a link to a Q&A document, which can be found here, prepared by Pompey Bug to address those issues.

In the Portsmouth News report on the injured pedestrian, John Holland, chairman of the Portsmouth Cycling Forum was quoted at length regarding the seafront bike lane, although as he made clear in a subsequent comment, he had been misquoted with the words attributed to him taken from an email he had written prior to his knowing about the accident.

Commenting on the accident to the pedestrian, he said “It concerns me greatly that an accident did occur and I ask everyone using or crossing the seafront cycle route to exercise caution and to show respect for each other.”