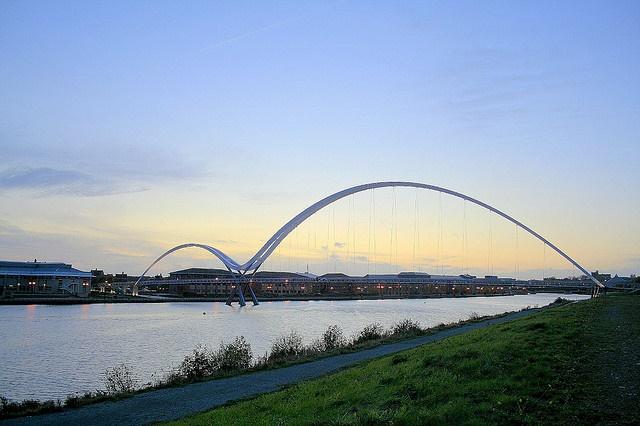 Police are appealing for information after a six-foot man in his 30s or 40s robbed a 12-year-old boy of his new bike at knifepoint.

Gazette Live reports that 12-year-old Jake Harland was threatened with a knife and robbed by a large man on a silver bike at around 9.20pm on Friday November 6. The incident took place on Durham Road, close to the roundabout of Bishopton Road, Darlington Lane and Durham Road bypass in Stockton.

Jake was walking home with a friend when the man approached him and threatened to stab him with a kitchen knife unless he handed over the £500 black Cube mountain bike he had received as an early Christmas present.

“I was walking home with my mate when this man grabbed the bike and said, ‘Give me the bike or I’ll stab you’. A shudder went through me. He was holding a kitchen knife. I just gave him it.”

The thief then rode off towards the A1027 on his own bike while pushing Jake’s. He is described as a white male, aged between 30 and 40 years, around 6ft tall and of big build. He was wearing a black body warmer with the hood up.

“I’m so angry that he can just walk up to someone, threaten them and take their things. It’s just not fair. He was on a bike as well. He rode up to them, threatened them, and rode off on his bike while pushing Jake’s.

“Jake was shaken by it. They’re not big kids – they’re only small – about four-foot something. This was a six-foot man in his 30s or 40s with a kitchen knife. When someone has a knife you don’t mess about.

“He’s had the intention of taking a kitchen knife out - would he have used it? Luckily Jake had the sense to not argue. But if this man goes to do it to some other children, it could be worse. Would he stab them?”

If you have any information about the incident, you can contact PC Chris Pringle on the non-emergency 101 number, or Crimestoppers anonymously on 0800 555 111 or at http://www.crimestoppers-uk.org.