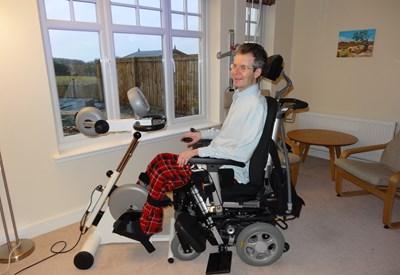 A father with Motor Neurone Disease (MND) has amazed doctors by managing to cycle 1,000 miles in his living room after being given just six weeks to live.

Calum Ferguson, who has the same incurable condition as the physicist Stephen Hawking, managed to overcome debilitating muscle weakness to pedal more than a thousand miles for charity in ten months.

He has raised more than £61,000 for MND Scotland and hopes his legacy will be adapted bikes for the 464 other sufferers in Scotland.

He was given just 6 weeks to live when diagnosed in March 2010, but still manages to clock up over six miles a day at home on his adapted bike.

He told the Daily Record : “I’m no miracle. With good care, equipment, ventilation and physio, my health is stable. The focus of my campaign is to make sure people have the care and equipment they need.

“My experience shows a lot more than you think can be done to help improve the lives of people with MND.

“I’ve set myself a challenge and cycle over six miles a day at home using my bike and I won’t stop until I’ reached my target.”

Calum, 52, a business manager with a US finance management firm, was in good health until he noticed his right hand was becoming slightly weaker.

At an annual medical for his employer, he struggled with a strength test and was diagnosed in March 2010.

“Two weeks later, I was being told I had 18 months to two years left to live. There was very little sugar-coating and the doctors tell it like it is.

“It took weeks to sink in and I didn’t want to talk to anyone about it. I found it difficult to come to terms with.

“My children were eight, nine and 12 and my focus was to create memories and spend as much time with them as possible. We took the children on holiday to American and Australia and had a fantastic time. I even pushed myself to go horse riding because it was something I had always wanted to do.

“Being told you have MND puts everything into perspective. You no longer worry about the small things.”

He said: “I thought, ‘This is it. I’m going home to die.’ I prepared myself and wanted to be at home with my family.

“I’d lost my voice and mobility and my body was very weak but somehow I kept on going. Amazingly, due to good care, equipment and physiotherapy, my condition slowly improved and has since pretty much stabilised.

“My breathing was the equivalent of being up Mount Everest with no air. One third of my lung had collapsed and I was in a pretty poor state.”

He said: “Without the care and equipment I wouldn’t be here today. If other MND patients were given the same assistance as me they could have a much better quality of life.

“When you’ve got a terminal condition you’re not expected to survive long, so provision is not brilliant.

“I had to buy my own wheelchair and replacing the lifting mechanisms costs £300 each. Hiring the bike costs £750 a quarter.

“I use my ventilator during the day and night and if there was any change to my care package I would have just six to eight weeks to live.

“Now I have limited mobility but I am still able to talk normally and eat a good diet.

“I can use the computer via equipment which enables me to control it using my eyes and voice.

“But there are many MND sufferers who have access to none of this. Something needs to change.”

Health Secretary Shona Robison has visited Calum to discuss the challenges he has faced.

She said: “It’s valuable to meet someone who has direct experience of the services. I will keep in touch with C Calum and MND Scotland to hear how these develop.”

MND Scotland chief Craig Stockton added: “What Calum has achieved in such a short space of time is phenomenal. We rely on the support of people like Calum.”