We reported back in January about the prototype Traitor bikes spotted at the CoreBike show and very nice they were, too. Production bikes have now started to arrive and their prior exposure to bike shops, expert insiders and journos like us has resulted in the odd tweak here and there, especially on the build specs. Most noticeable is the paint finish which is top notch but more on that later.

First up is the Luggernaut which has retained its much-admired sky blue finish and is a do-it-all singlespeed design with classic lugged construction and practical features like forged stainless steel dropouts, room for larger tyres and mudguards plus mounts and cable routing for internal gear hubs.

Transition Bikes, the company behind Traitor from Washington State, claim that before DuPont paint goes on, the whole frame is treated with a phosphate coating that protects from corrosion. It's worth noting that Washington's climate is very similar to ours, thus their concern with rust proofing and understanding about mudguard eyes. 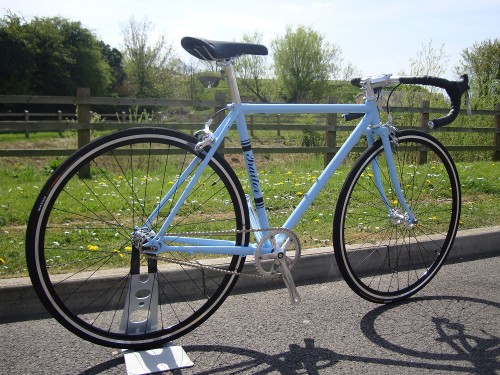 Apart from that, details we love are the retro investment-cast crown, the subtly curved legs and massive clearance for tyres. The tubes are Italian-drawn double-butted by Columbus using their proprietory Cromor seamless material and all the lugs are investment-cast for a crisp, sharp look. It really is beautifully finished, right up there with the best you'd see from local artisan builders.

We can't claim to have ridden the bike apart from a quick spin around a hotel courtyard but as befits a bike intended for all-year-round use the Luggernaut is relaxed with longer stays and a slacker head angle for stability. According to Transition, "This is a comfortable bike that can get around town quickly and is extremely easy to handle.

The Ringleader shown here with the stunning white paint is an altogether different animal. Proper track geometry means that you cannot expect the same practical benefits as the Luggernaut but of course on the other hand it will go like the proverbial rattlesnake. There are drillings for both brakes.

The big draw here is the beautifully executed fillet-brazed joints on the frame - smooth. Brazing - as opposed to welding - means very fancy tubing can be employed - Columbus Cromor again but thinner gauges - but fillet brazing is incredibly labour intensive and requires great skill. The old immediately-post-war builders like Claud Butler built their reputations on fillet-brazed frames because they couldn't get lugs.
Transition claim that the Ringleader is the only production fillet-brazed fixie on the market and we're not going to argue with them because we certainly haven't seen another. Just look at that seat lug. Nice.

Prices for the Ringleader are £429.95 for the frame and fork or £749.95 for the complete build shown with flip-flop hub.

All available late June. Check out the distributor Windwave for stockists.