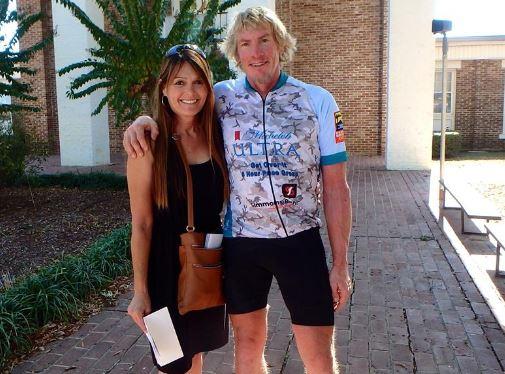 Kurt Searvogel is on track to smash the “unbreakable” record for the furthest distance cycled in a year, set by Britain’s Tommy Godwin in 1939 – and despite his busy riding schedule, the American found time to get married this week.

On Tuesday, Searvogel – nicknamed Tarzan – posted a picture on Facebook of himself with new wife Alicia, who also happens to be his crew chief on his record attempt.

“We stopped at the Grant County Courthouse to pick up our marriage license today,” he said.

“After the clerk gave us the license I said ‘Now, all I need to do is find someone to marry us.’

“The clerk proceeded to get on her cell phone and call her sister who was a Justice of the Peace and 30 minutes later we were husband and wife.

“Things move at jungle light speed when you hang around with Tarzan,” he added. “So if your disappointed with my miles today I have an excuse.”

The pair met last year when Alicia was signed up as a replacement driver for Searvogel when he rode the Race Across America and romance soon blossomed.

As his crew chief, she follows him in the recreational vehicle that is the base for their record attempt, while finding time to shop, cook, do his laundry and maintain his website and social media presence.

Wedding day or not, Searvogel, who had struggled with illness in recent weeks, still managed 175 miles on Monday and the 52-year-old should hit 60,000 miles in the next few days.

He now needs to average just under 199 miles a day to break the distance of 75,065 miles Godwin set more than 75 years ago, and is currently projected to beat it by more than 700 miles.

Great Britain’s Steve Abrahams, meanwhile, who set out on New Year’s Day on his attempt at the record, has ridden 49,952 miles to date, averaging a little over 169 miles each day.

His bid suffered a huge setback in April when his ankle was fractured after he was hit from behind by a moped rider.

While his 2015 bid continues, it is now running in tandem with a fresh attempt that began on 8 August after he regained full fitness from his injury.

Meanwhile UK-born Miles Smith, who lives in Australia, is also attempting the record and set out in April, but currently has the lowest daily average mileage of the three, at just below 135 miles a day.

The three Highest Annual Mileage Record attempts are being ratified by the Ultra Marathon Cycling Association, and you can find more information here.