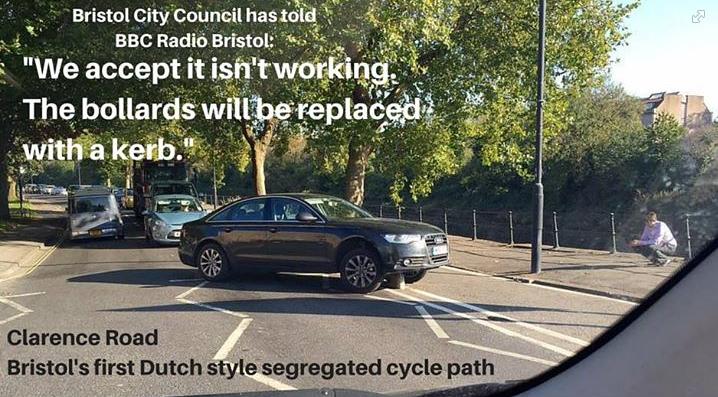 Bristol bike lane bollards: "If they're stopping cars they're doing their job".

Campaigner: councils should be allowed to trial bike infrastructure, even if it fails
by Laura Laker

A campaigner has defended Bristol council's trials of new cycling infrastructure after cars have driven onto the bollards protecting a bike lane, in one case becoming wedged.

Bristol City Council will replace the low concrete bollards, called Toby bollards, on the Clarence Road "Dutch-style" bike lane after complaints about safety, and damage to cars from people driving onto them.

Responding to concerns reported in the media that the trial designs were a waste of money, Sustrans' Jon Usher argues councils should be allowed to try out "light segregation" where budgets are stretched, as there are no design standards for cycling infrastructure in the UK, and what works overseas may not automatically work in the UK.

He also questioned how people got their cars wedged onto the bollards in the first place.

Usher, who is Sustrans' Bristol Programme Manager, told road.cc: "If people are driving onto them and stopping, the bollards are doing their job because it means the cars aren't getting through to the bike lane.

He added: "I don't know what goes on for a car to mount a bollard when it's on the highway."

Usher adds "light segregation" - things like planters, wands and armadillos, that provide separation from traffic without using kerbs- are part of a toolkit that allows councils to build bike routes at lower cost.

"It does come down to money unfortunately; the UK doesn't have a funding environment which allows us to provide full kerb segregation everywhere, so Bristol wanted to find out what might work, but it turns out they are having to go back and put a few kerbs in, which is more expensive than a few bollards."

He said: "There is a learning process for [things like bollards on bike lanes]. European best practice probably wasn't appropriate in the UK because we want more protection, and it turns out those Toby bollards don't offer enough protection."

Toby bollards have been trialled in Seville in southern Spain, and in the UK light segregation, in the form of planters and armadillos, are used on Royal College Street in Camden, North London. Planters there have similarly suffered some hits from vehicles, prompting people to say the designs have failed.

Plans to use armadillos on one of Manchester's busiest roads were met with derision (see link above).

Clarence Road is a busy A-road that needed something more robust than white lines but, Usher says, in this case the Toby bollards weren't robust enough.

However, he says, this shouldn't stop councils trying out new designs.

"It's part of a local authority's responsibility to trial to see if they can find solutions to fit their context and it is their responsibility for them to share when trials go well and when they don't go well to save other councils money," he said.