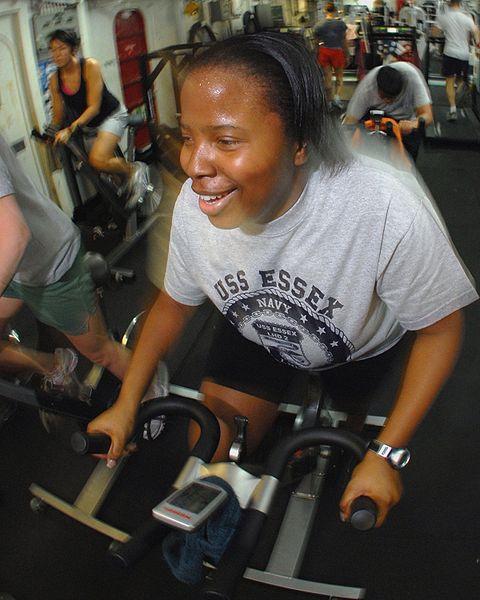 Professional cyclists tend to pedal at very high cadences, frequently over 100 revolutions per minute, as this proves to be more efficient. However, Medical Daily reports how Oxford University researchers have found that such an approach is much less effective for recreational cyclists.

Dr Federico Formenti, who led the study, explained that the team was looking at how VO2 max was estimated when using a stationary bike. Currently, calculations are based on body mass in kilograms and work rate in watts, but the team wanted to see if including pedalling speed – cadence – would produce more accurate results.

The study participants were ten healthy men aged between 19 and 48. Their energy consumption was measured at different cadences and exercise intensities, while video-based motion analysis was employed to study the mechanical determinants of changes in energy cost.

Formenti said that at very low intensities, a large proportion of the energy used in pedalling quickly goes on nothing more than spinning the legs.

“We used mathematical models to show the degree to which energy required to spin the legs increases with cadence. At a low exercise intensity of 50 watts, a recreational cyclist trying to pedal like a professional at 110 revolutions per minute will use more than 60 percent of their power just to spin their legs. Only 40 percent is going into overcoming the cycling resistance. To translate that to cycling on the road – only 40 percent of the energy you burn would be going into moving the bike forward.”

Based on their findings and other published results, Formenti and colleagues have proposed a new and more accurate equation for estimating energy consumption on stationary bikes, factoring in cadence as well as the rider’s weight and the power they produce.

“Recreational cyclists want to pedal efficiently, just like the professionals do, but achieving that means pedalling differently from the professionals. Pedalling faster might work for Tour de France winners, but it probably won't work for the rest of us. At low exercise intensity, increasing cadence mostly results in a less effective stroke, reducing efficiency.”

1
We asked you how coronavirus had changed your cycling habits and the response was overwhelming – here’s what you told us
2
Ribble releases Endurance Ti Disc road bike
3
Campaigners call for reversal of Richmond Park cycling ban – and so does Jeremy Vine
4
Don't mess it up! As warm weekend looms, cyclists reminded to ride responsibly
5
Cycling UK offers free membership to NHS staff - pass the news on to anyone you know who could benefit
6
2,000+ sign petition accusing Vélo Birmingham & Midlands owners of “profiteering” by not offering refunds for cancellation
7
Zwift adds second daily guest world due to congestion
8
Mail accused of distorting truth in “MAMIL madness” Regents Park cyclists story