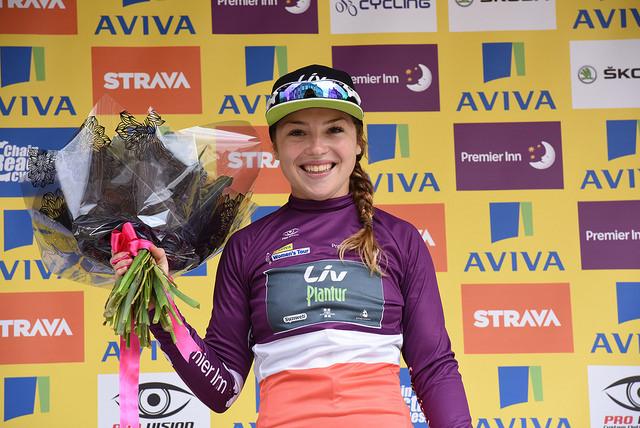 Lucy Garner, junior world champion in 2011 and 2012, is to join British UCI Women’s team Wiggle-Honda on a two year contract.

The 20-year-old from Leicester – her 21st birthday is a week today – joins Rochelle Gilmore’s team from Liv-Plantur, which she turned pro with at the start of the 2013 season when it was known as Argos-Shimano.

In July, she won Stage 1 of the Route de France, and looking ahead to her move, she said: “It has been a good three years.

“But I’m definitely looking, especially next year and the year after, to build on my sprint, and also work on building a bigger engine so I can be there in the finals.

"That’s another real reason why I’m going to Wiggle Honda; they will give me real opportunities to be in the final, but not necessarily always sprinting.

“There’s going to be a lot of good riders on Wiggle Honda, but it’s really good for me just to ride the races to make me stronger. That’s definitely going to help me in the future with my sprinting.”

Also moving to Wiggle-Honda is her current team mate and close friend Amy Pieters and Garner said: “The last couple of years Amy and I have really got on well off the bike, as well as on the bike, and I really trust Amy as a rider.

“We’ve been riding together for three years now, and for the sprints she’s always the last lead-out girl for me. I know what she’s doing and she knows me really well. I really trust her as a rider, and she’s a really strong rider as well!

“It’s really nice that we can do the move together, and it’s always nice to have someone there that you know of course!”

Team owner and manager Rochelle Gilmore said: “This is an extremely exciting signing for the future of our team and for our British based sponsors and fans!”

“It’s the perfect moment to have the opportunity to start working with Lucy. We’ll have a very busy race schedule in 2016 and with many athletes focusing on Rio, we’ll have plenty of opportunities to support Lucy’s development and ambitions.

“A professional environment is of the utmost importance to Lucy, so our team of very dedicated staff and experienced athletes are extremely eager to welcome Lucy into the family and be a part of her rapidly developing career.”

Last week, Garner was named in the senior Great Britain squad for the UCI Road World Championships in Richmond, Virginia, later this month.