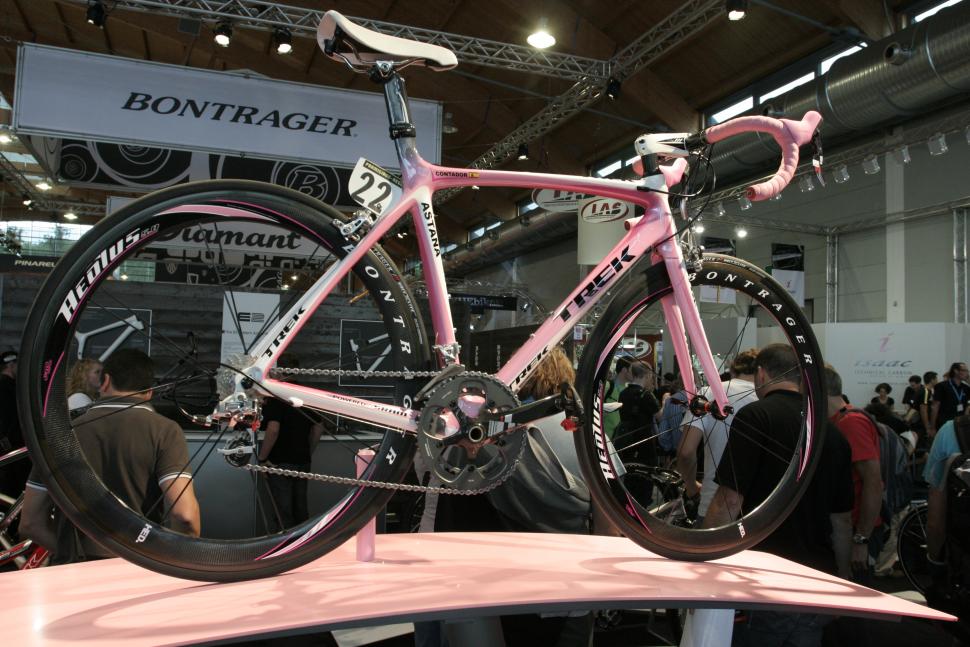 Trek at Eurobike
by Tony Farrelly

Trek had some eye-catching machines on display at this year's Eurobike, at most shows Contador's Madone would have been pulling the crowds or any one of the other very elegant '09 Madone range. At Eurobike though, all eyes were on a commuter bike – the weird, and possibly wonderful District belt drive singlespeed comprising an aluminium frame, Bontrager semi-disc section wheels, a Gates Carbon belt drive system, some moustache bars… and a nice clock. The belt is reputed to knock 280g off the overall bike weight and delivers an almost silent ride – we rode one on a Fixie inc prototype (more on that soon) and the belt certainly delivers a very direct input to the back wheel – these things are claimed to be more efficient than a chain, and lighter and longer lasting too, and they don't need lubing either. Trek have come up with what looks like a neat solution to getting the belt on and off too, via a partially detachable dropout (Fixie opted for an S&S coupling), Trek must be pretty confident in this arrangement because alignment is particularly crucial to the effectiveness of a belt drive. 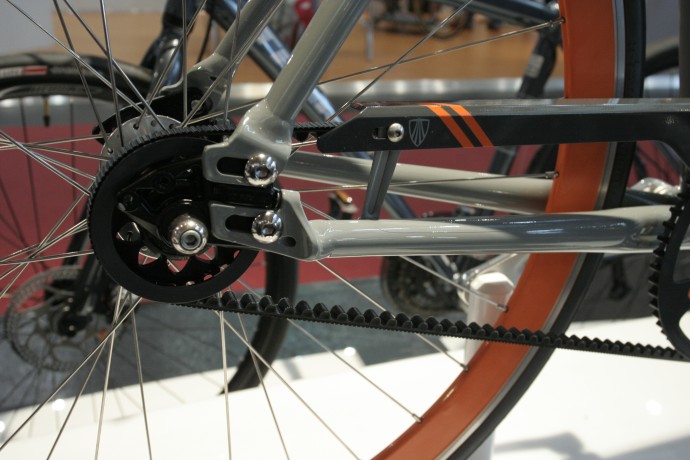 The Destiny certainly looks pretty startling – and this is a production model, they are slated to go on sale in the US in October costing around $900. Not sure that a completely silent bike is such a good idea in a city… or whether those wheels won't catch cross winds, but let's wait and see. It does have a nice clock. The Destiny wasn't the only belt drive on Trek's stand either, they were also showing off the latest version of the Soho commuter bike also with belt drive in this case mated to a Shimano Nexus 8-spd hub. This looks like a more practical application of the belt drive mechanism than the Destiny – popular bike that it is, the Soho could still benefit from dropping some weight and the belt will help there. Interestingly, (well, a bit) both bikes sported chainguards – something of a mini-trend among urban machines at this year's Eurobike. 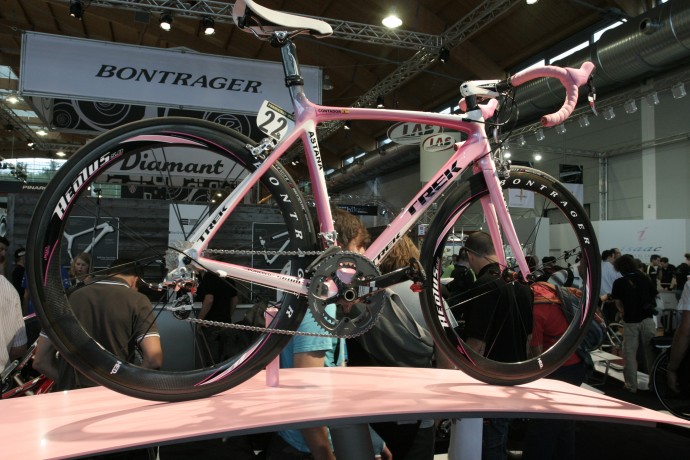 The other star of the show for Trek was Contador's pink Madone 6.9 (we're assuming to celebrate his Giro win) – I don't know what Lance would have said, he famously wouldn't even ride a bike with a sloping top tube cos he reckoned it “looked like a girl's bike”. Amid all the super high-end kit on Contador's bike it was nice to see a comfy saddle, maybe that's the mark of a champion – knowing where not to bother saving weight. Lance no doubt would have approved of that. 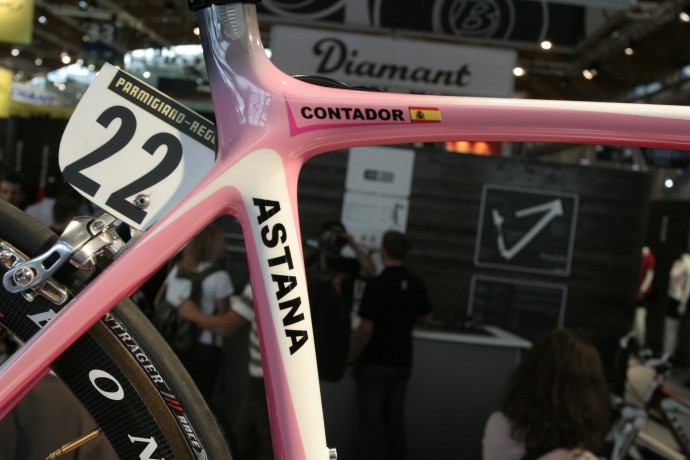 Trek Gallery
Early Madones used to raise purist hackles because they thought the looked 'odd' – they did win the occasional race though. The winning ways continue, but the latest version of the Madone, which is basically a completely different bike from its predecessor, is a bit of a looker too. Best looking of the lot though is the Madone 6.5 WSD, but then I've got a soft spot for compacts – we spotted these two, one built up with the latest Dura Ace 7900, the other with Ultegra, girls bike or not we can't help feeling that the more aggresively compact Madone WSDs would probably suit quite a few men – well if Alberto can ride a pink bike…