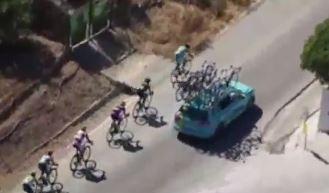 Video: Vincenzo Nibali thrown off Vuelta after being towed by team car

Astana’s Vincenzo Nibali has been thrown out of the Vuelta a Espana after being caught on film taking a tow from a team car during yesterday’s Stage 2 to Caminito del Rey.

The Italian, winner of the race in 2010 and one of only six men to have won all three of cycling’s Grand Tours, was caught behind a big crash with around 30 kilometres remaining.

As he tried to limit his losses, helicopter footage showed the Italian at the front of a group of around 20 riders looking to chase back on to the peloton with 17 kilometres or so remaining when his Astana team car drew level with him.

Nibali then held on to the car as it accelerated away from the group he was riding with, the images beamed around the world.

While riders will often take advantage of a so-called sticky bottle offered from a team car to help them rejoin the group after a crash, puncture or mechanical incident, commissaires regularly turn a blind eye so long as the assistance is not too blatant.

In Nibali’s case yesterday, however, the aerial footage clearly shows the advantage he gained – and one denied to the other members of the group who were also battling to rejoin the race.

In a statement, race organisers Unipublic said: “Basing their decision on television images clearly showing an infringement of the rules, the Vuelta race commissaires decided to take him out of the race,” organisers said in a statement.”

The chief commissaire on the race, Bruno Valcic, added: “The film shows clearly that Nibali was clinging to the car for 200 metres.”

Astana sports director Alexander Sheffer has also been expelled from the race, while the team’s second support car will not be allowed to follow the next two stages.

The Kazakh team said it “is sorry for the error, and apologises to the peloton and race organisers for the harm these televised images caused to professional cycling.”