It looks like you get a lot of bike for your money with the Mekk Pinerolo AL 2.0.

Mekk’s philosophy when designing bikes is that the frame takes priority. If you talk to either Mark Edwards of Ken Knight, the UK guys behind the brand, they’ll tell you that they want to provide a frame that’s good enough to last you years. Components wear out and are upgradeable over time, but the frame is the heart of the bike and it’s likely to remain constant, so that’s where the majority of your cash goes when you buy a Mekk. 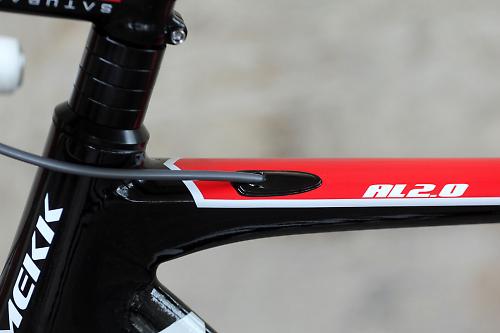 The frame in question here is made from what Mekk describes as ‘Super Lite Aluminum Triple Butted Seamless Tubing T4/T6 Heat Treated’. Triple butted means that the wall at one end of the tube is a different thickness from the wall in the centre and also from the wall at the other end. The idea is to provide strength where it’s needed while keeping weight to a minimum. Heat treatment hardens and increases the strength of the metal. 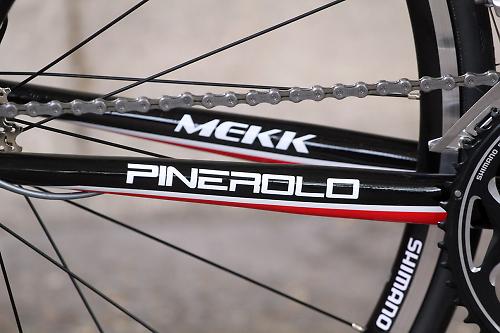 It’s similar (but not identical) to the frame of the Mekk Pinerolo AL 1.0 that Stu Kerton reviewed here on road.cc a couple of years ago. Stu really rated that frame.

The oversized down tube ovalises at either end to increase the size of the mating surface with the head tube and the bottom bracket shell, while the top tube flares out at the front end to provide further support for that head tube. The slim, bladed seatstays do something similar, increasing in size up towards the junction with the seat tube. 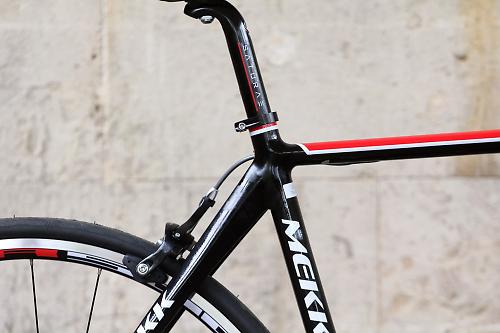 The welds are all very tidily done to the extent that at first sight you might think that this is actually a carbon-fibre frame that has popped out of a mould. Take a closer look, especially around the bottom bracket, and you can spot the telltale ripples underneath the paint, but this certainly a neatly made frame. 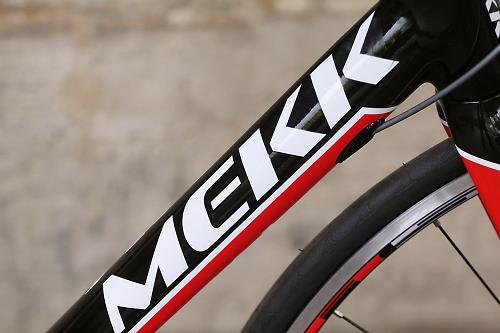 The cabling is internal, the gear cables entering the underside of the down tube. That’s fairly unusual positioning (although by no means unique), most brands opting to put the holes on the upper side of the down tube, or on the sides. We’ll keep an eye on whether anything getting thrown up off the front wheel can work inside there. The rear mech cable exits towards the end of the driveside chainstay. 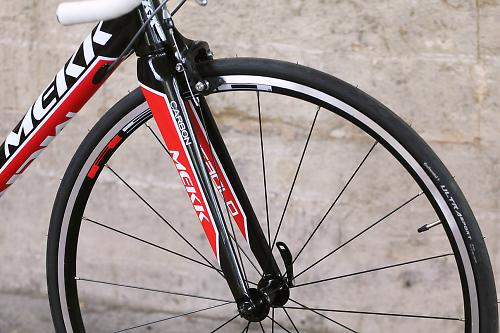 The fork is made with an aluminium steerer and carbon-fibre legs. Those legs are fairly deep section so we’re hoping that they keep things feeling taut at the front.

As I mentioned, Mekk is firmly of the belief that investment in a high-quality frame is the way forward, but you still get what looks to be a very good spec for the money here. 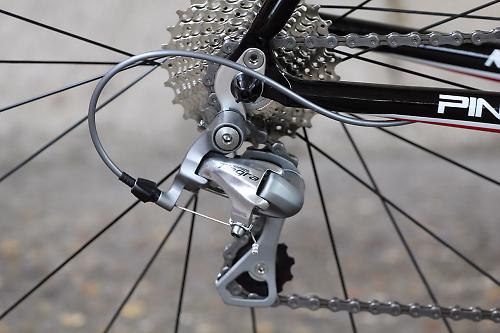 The groupset is mostly Shimano’s mid-level Tiagra, although the brakeset is from the next-tier-down Sora groupset. The chainset is a compact, meaning that it comes with 50 and 34-tooth chainrings rather than something more traditional like a 52/39-tooth setup. Matched up to a 12-28-tooth cassette, the idea is that it gives you a lower range of gears to take the suffering out of the climbs. 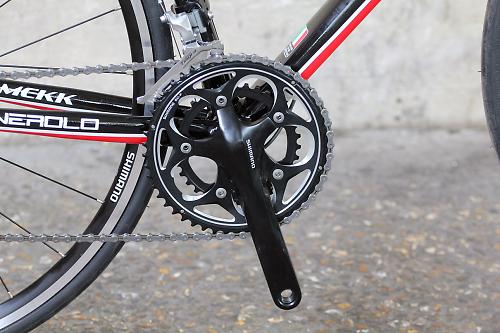 The wheels are Shimano’s reliable R500s and they come fitted with Continental Ultra Sport II tyres which we know from experience to be decent offerings for the money. 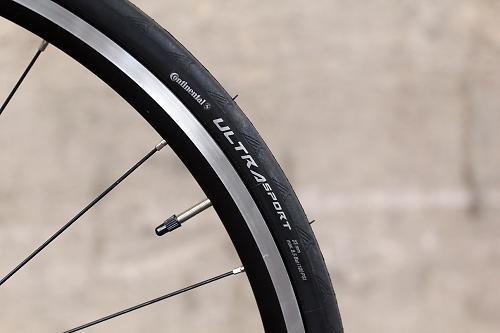 The saddle is a San Marco Era Start while the handlebar, stem and seatpost are all aluminium options from Mekk’s in-house Saturae brand. 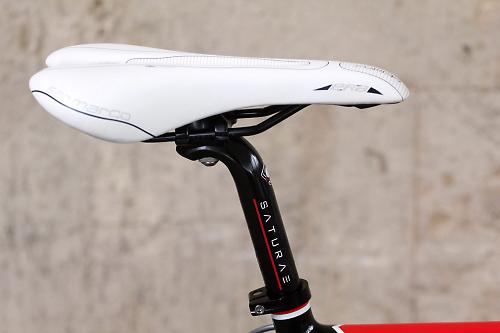 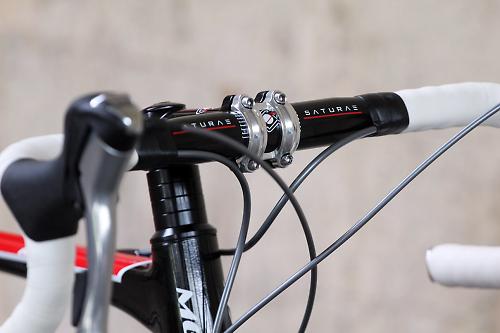 Of the bikes that we’ve reviewed here on road.cc recently, the closest in price to the Mekk is the GT Grade Alloy Tiagra at £849.99. As you can work out from the name, that bike is also built around an alloy frame and has a largely Shimano Tiagra spec, but it’s intended for use on non-smooth roads as well as tarmac – surfaces like gravel – and it comes with disc brakes, so it’s quite a different proposition. 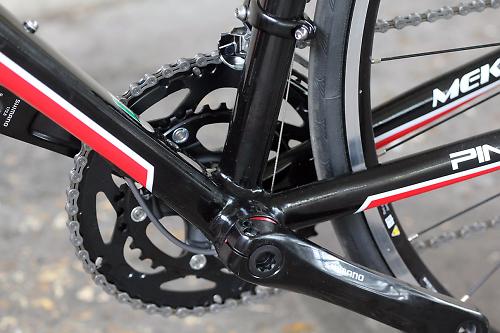 The Lapierre Audacio 400 that we reviewed back in February was £899.99 – the same price as the Mekk, down to the penny. That bike is built around an alloy frame and alloy/carbon fork, lime the Mekk, and it has a complete Shimano Tiagra groupset whereas the Mekk has a couple of downgrades. 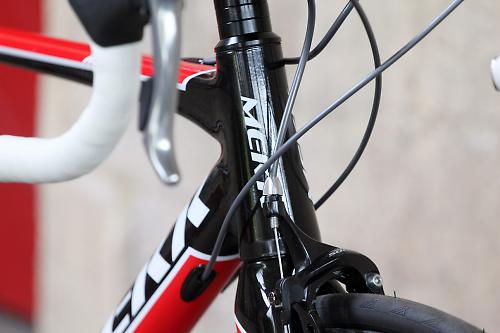 That bike was also pretty light (7.8kg/17.2lb) and Stu (him again!) was very impressed with the ride, so the Mekk faces some stiff competition here.

Priced at just under £900, the Mekk is within the price band allowed by most employer Cycle to Work schemes.

It’s the ride that counts, though, and that’s what we’ll be doing once we have the saddle height and handlebar position dialled in. We’ll be back with a review on road.cc soon.

1
Conor McGregor knocked off his bike... and gets a lift home off the driver who hit him
2
167 cyclists – and just four drivers – fined in police crackdown during Tour Down Under
3
The head to toe and full of nuts edition! Five cool things coming soon from Clif, MAAP, Chrome, Magicshine and GCN
4
Canyon reduces UK bike prices, citing better exchange rates, shipping costs and customs charges
5
The Cobble Wobble – a brutal 179-yard cobbled hill climb – is back after eleven-year hiatus
6
Father and son named as cyclists killed in suspected hit-and-run
7
"Our intention was not to hide these changes": Strava apologises for price hike controversy
8
Driver assaulted cyclist for questioning mobile phone use