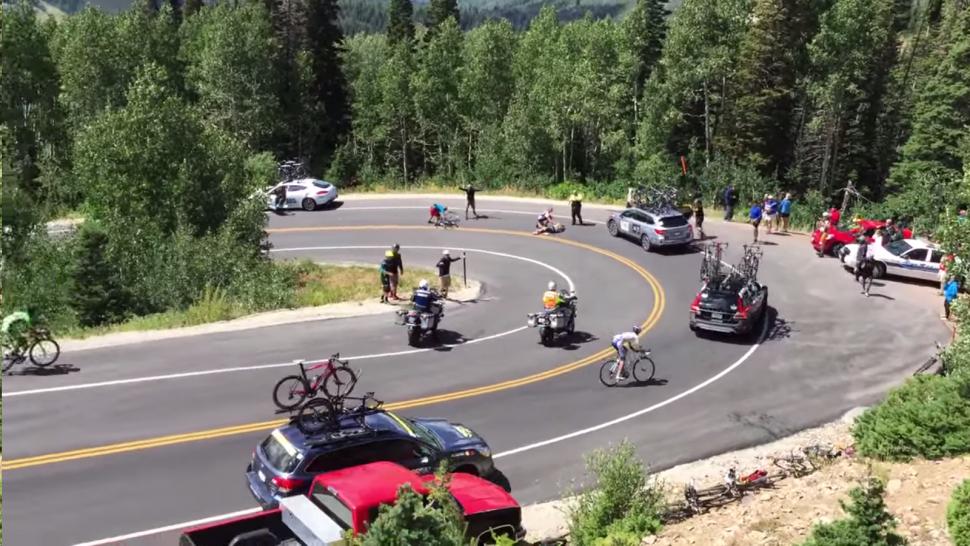 A dramatic high speed crash has left pro cyclist Matt Brammeier with serious injuries after he collided at high speed with a support vehicle during the Tour of Utah.

Camera footage shows Brammeier, who was chasing back to the main peloton, approach the left hand bend on a steep descent at high speed. He hit the support vehicle with such force his water bottles were catapulted over the car and into the forest. Brammeier then lay motionless as bystanders attempted to warn oncoming riders.

The Irishman, who rides for MTN Qhubeka, suffered broken ribs, a fractured pelvis and a punctured lung, but is reported to be in a stable condition at a local hospital. In the chaos one motorbike stopped at the bend's apex, before two more riders collided with it.

Bystander Aaron Cengiz caught the incident on camera. “When he hit the car, you know, his water bottles went flying everywhere,” he is reported by Fox News as saying.

“I mean, it looked painful, obviously.”

“This rider came through too fast and he went straight through the corner,” said Team Optum cyclist Thomas Soladay," Fox reports.

“The rider was definitely kind of out of control in that corner,” said cyclist Jesse Anthony. “So, that was a risk he was taking.”

Tour of Utah organisers have not commented except to say support vehicles were following protocol and that neither rider nor driver were to blame for the collision.

“Matt Brammeier was involved in a high speed collision with a vehicle during the queen stage of the Tour of Utah. Thankfully, Matt has suffered no head, neck or spinal injuries and is currently stable in hospital. His musculoskeletal injuries are significant however. He suffered rib fractures on both sides as well as a small pneumothorax. He also has fractures of the sacral and pelvic bones. Matt is unlikely to require surgery but will need some time to recover from his injuries.”

Footage prior to the crash shows several riders approaching the hairpin bend on a steep section of mountainside road as support vehicles overtake. Shortly before the collision Brammeier can be seen approaching the bend at high speed. The rear wheel fishtails briefly, before the lifting entirely off the road moments before collision.

La Gazette des Sports said on Facebook Brammeier "totally lost control" of  his bike, to the extent nothing could have prevented it. They said if it hadn't been the car it would have been the ravine.

The Tour of Utah is a 700 mile, multi-stage race across the state. The final stage took place yesterday and was won by Joe Dombrowski of Cannondale-Garmin.