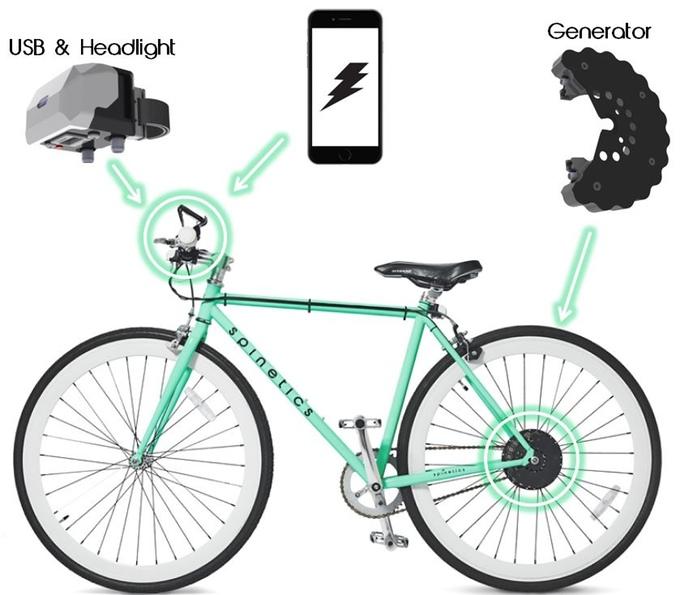 Inventors in Miami have prototyped what they are calling a frictionless charger that generates electricity through electromagnetic induction, powered by a moving bicycle...and hoping a KickStarter campaign will fund the product's final development to the tune of $85,000.

The CydeKick uses a magnetic disc attached to the rear wheel hub, which spins next to coils attached to the frame as the wheel turns, generating electrical current without friction, all for the purpose of saving your devices from running out of battery miles from a plug socket.

The CydeKick has been three years in the making and the product's developers say they are close to final completion of the device, which comes as a front light with a USB port, or as just a front light.

Nick Zamora, developer of CydeKick and co-owner of Spinetics says: “The CydeKick Pro is a self-powered, add-on bicycle generator that converts a cyclist's motion into electrical energy for charging your phone and powering your lights. No need to worry about your battery or bike lights dying while you’re riding. The CydeKick generates, stores, and delivers power to keep you safe and connected. Best of all it adds no mechanical friction meaning you won’t feel like you're biking uphill.”

This product, Zamora claims, is the first to add a USB port to a bike in this way. He says the device, with its handlebar-mounted LED light, will be weather proof. It is being sold as an environmentally friendly way of charging mobile devices, and will convert AC generated power to DC for mobile devices. A different mount will be offered for bikes with disc brakes.

The $85,000 will help purchase tooling and produce the product in low volumes for consumer use, as well as going towards manufacturing and labour costs, and improvements to the product itself.

Zamora says: “To improve power output, we’ve applied several techniques including the use of high-grade neodymium magnets, special arrangement of coils with respect to magnets, careful selection of magnetic & non-magnetic materials, a closed loop path for flux, and our new track-and-swivel mount for maximizing the proximity between stator and rotor.”

The Kickstarter project has attracted $13,000 funding at the time of writing, with 19 days until the fundraising deadline of 29 August.