Back to news
news
Miscellaneous
Urban 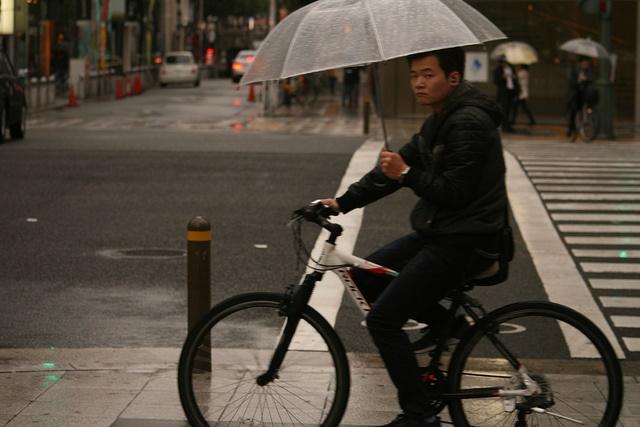 Police in Japan crack down on umbrella-toting cyclists

The Japan Times reports that demand for ponchos has soared since revised traffic laws came into effect at the start of June. Police have been cracking down on anyone cycling holding an umbrella and so cyclists have been looking to other means of keeping themselves dry.

Under revised laws, holding an umbrella can be considered to constitute dangerous riding. Individuals 14 years and older who commit this or other cycling violations twice in three years are obliged to attend a three-hour safety lecture.

At a Tokyu Hands outlet in the city of Osaka, the number of inquiries about rain ponchos was said to have been 1.6 times higher in June than in the same month the year before with the figure then more than doubling in July. At a Loft store in the same city, July sales were reported to be 8.4 times higher than the previous year.

In 2011, Dutch company Madame de Pé unveiled a poncho called Le Déluge as part of a range of rainwear for female cyclists. Priced at €148, the emphasis is on fashion, but it is supposed to be practical too.

Extra fabric ensures the poncho covers the knees and curtain weights keep it from billowing, while a gutter channels water away. The hood turns with your head, there’s a visor to keep the rain out of your eyes and the cuffs extend over your hands to keep them dry as well.