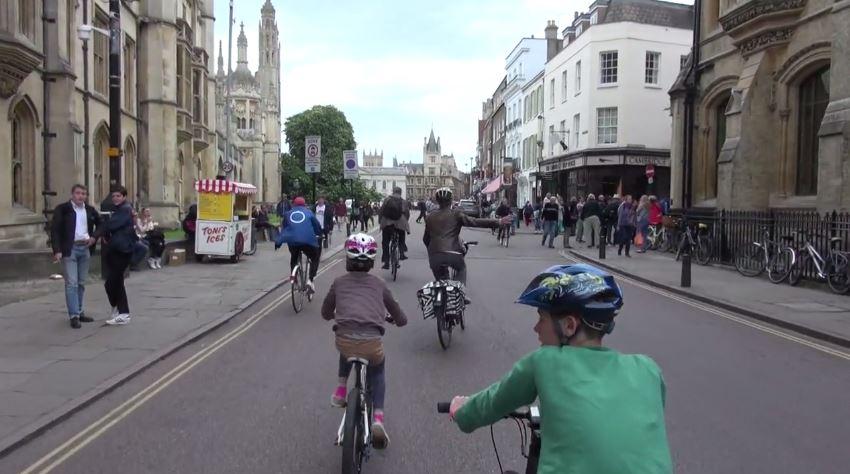 Film looks at how city achieved coutry's highest level of cycling - and what challenges lie ahead...
by Simon_MacMichael

Cambridge is the undisputed cycling capital of the UK, with levels of people riding bikes for daily journeys that campaigners in other cities here can only dream of attaining – and a short video released today by Streetfilms explores how that has been achieved, as well as looking at some of its infrastructure.

The 10-minute film addresses issues such as the traffic scheme introduced in the city centre to encourage people to use bikes rather than cars for daily journeys, as well as the use of filtered permeability in residential areas, both areas examined in an earlier Streetfilms video about the Dutch city of Groningen, which has the highest proportion of cyclists in Europe.

It was filmed in May this year by StreetFilms’ director, Clarence Eckerson Jr, who interviewed cyclists, campaigners and a local bike shop owner among others, and who says: “I just really loved the energy of Cambridge. It was remarkable to just see so many people riding bikes. And kids!”

There’s a question mark, however, over how much cycling can still grow in Cambridge in the future; Roxanne De Beaux of the Cambridge Cycling Campaign points out in the video that for that to happen, more segregated infrastructure will be needed to encourage those who don’t currently ride to do so.

Meanwhile, Mike Davies of Cambridgeshire County Council discusses measures that need to be taken to ensure that the city’s new residents – its population is expected to grow by a third in the coming years – embrace bikes rather than using cars to get around.

Other short videos shot in and around the city as part of the Streetfilms project can be found here.