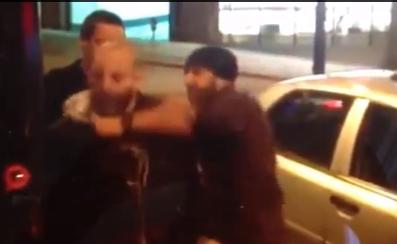 Policeman who punched cyclist in face found guilty of assault

Will remain on patrol until he is sentenced
by Alex Bowden

A Canadian policeman who was filmed punching a cyclist in the face as he arrested him has been found guilty of assault, reports Global News. Ismail Bhabha, who pleaded not guilty, is expected to be sentenced in November, but Vancouver Police say he will remain in his current position as a patrol officer until then.

The 2013 incident saw Bhabha and a colleague pull over cyclist Andi Shae Akhavan for jumping a red light in Vancouver city centre. Akhavan said the two officers were going to write him up and he questioned whether it was really worthwhile.

“I basically said ‘don’t you guys have anything better to do? I’m only a block away from my house, I was only you know, just cruising home real quick,’ and at that point, I guess, because I asked them if they could be doing something better than arresting a bicyclist, or writing up a ticket for one, they decided to put cuffs on me.”

Midway through putting on the handcuffs, Bhabha is seen launching the punch. Akhavan said he thought it happened because he moved his arm. At the trial, he said that he only moved his arms involuntarily when Bhabha twisted them behind his back.

Police said that Akhavan was "allegedly confrontational with police," and "escalated the situation." Akhavan said that he never resisted arrest or raised his voice.

Akhavan’s friend Mike Schwarz, who shot the video, said he was unimpressed by the decision to allow Bhabha to remain on patrol.

"I would think that if you have an assault record, you probably wouldn't get hired into the police workforce, but I'm sure his track record speaks for himself ... I'm sure they've taken a lot of things into consideration with that decision."