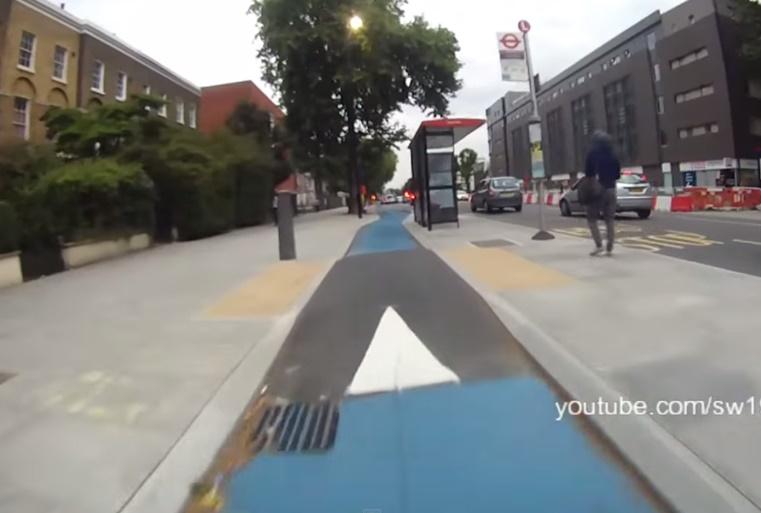 A new video uploaded to YouTube shows what it’s like to ride a new segregated section of the CS2 route. The uploader, sw19cam, seems generally impressed with work despite a surface they say is inferior to the road.

Sw19cam’s description of the video reads: “The surface is noticeably worse quality than the road, but overall it's so much better than before! I've left plenty of footage afterwards to show you what 'paint in the lane' is like. One day I'll look back at this video and be amazed I ever cycled along here.”

TfL said that the number of cyclists on CS2 increased by 32 per cent in the year after it first opened. It estimates an average number of cyclists per day of around 2,000 in each direction at some points along the route. Despite this heavy use, there was initially no physical protection for cyclists and so it was earmarked for improvements.

The original CS2 upgrade plans were for bike lanes that were segregated from motor traffic for almost the entire route. However, following consultation, segregation was scrapped where the route passes Whitechapel Market.

The new plans see people cycling along the eastbound side of Whitechapel Road on a two-metre wide cycle lane which is with a five-metre wide bus lane – something that London Cycling Campaign describes as "a daunting prospect for many people who cycle, or who would like to start cycling."

The campaign group is also critical of the plans for junctions along the route, pointing out that over 70 per cent of the most serious injury collisions to cyclists in London happen at road junctions.

“Poor design of junctions, even where there are segregated routes for cyclists, is a serious concern within the current proposals for the CS2 upgrade. All cross roads carry cycle traffic and there are some with high numbers of cyclists. At many junctions there are plans for 'early release', letting the cyclists move off before other traffic.

"We consider this is only acceptable on minor roads with little or no turning traffic, and recommended in our response to the consultation that TfL implement cycle segregated junctions, which TfL have previously agreed are 'capacity neutral' so would not cause delays to traffic."