Subscribe
Back to news
news
Riding
Leisure
Art and design 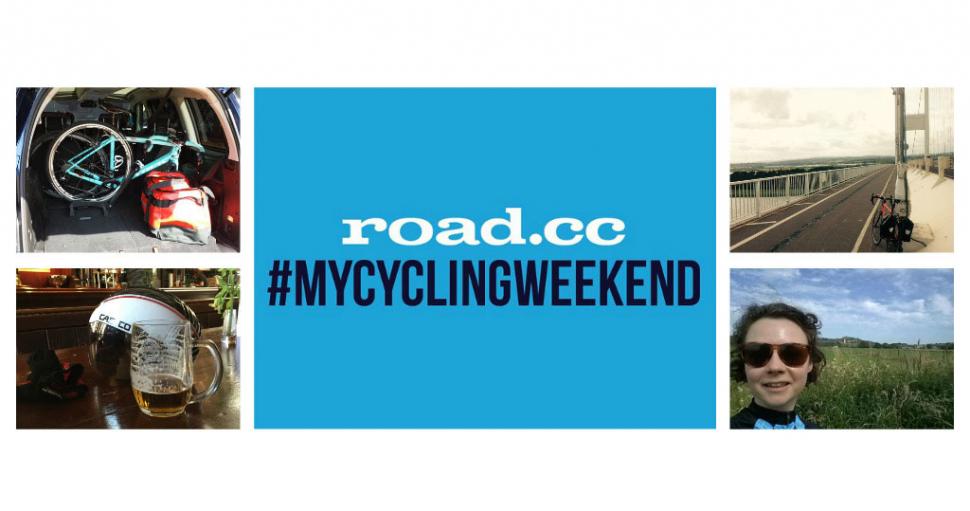 There were some big rides this weekend, including 300 cyclists riding 240km on the first two days of the Ashes Cycle Challenge
by Elliot Johnston

We're not sure whether this form is inspired by the seasonably friendly weather, or the monumental feats of athleticism on show across the Channel in France, but you guys have been pumping out the miles this weekend.

We asked on Friday if you were celebrating the end of the working week and the beginning of #mycyclingweekend, with a pint of beer or a well-earned ride. It appears you answered with a resounding 'ride'.

Well, that is apart from road.cc user Judge dreadful who appears to have answered with a solid 'both'. Here's a shot of a pint alongside his aero Casco helmet. We assume the marginal aerodynamic gains are there to balance out the impact a pint of beer will have on your performance, right Judge? Beer and a helmet - image via Judge dreadful on roadcc

Elsewhere loads of you were undertaking monumental cycle rides of your own.

If you're a sport fan, there's no overlooking the fact that the UK is currently hosting the Ashes; arguably the most hotly contested cricket series in the world. And so, as we'd expect, there are plenty of our readers and other cyclists who are keen to see as much of the action as possible.

What we didn't expect, however, was that 300 riders would be riding from Lanacashire Cycling Club to the Oval over four days, taking part in the Investec Ashes 2015 Cycle Challenge, but missing out on all the cricket.

One of the cyclists taking part in the challenge was Richard Clark, who tweeted us this photo of his efficiently packed car before he undertook the first day of the challenge to Trent Bridge.

The group will catch some cricket though, they're due to arrive at the Oval two days before the second test - all while raising money for Lord’s Taverners Charity, who give disadvantaged youngsters a helping hand. Good luck for days two, three and four guys!

The 300 Ashes Challenge cyclists weren't the only ones getting involved in the cricketing action. Alec James covered the 300km from London to Cardiff to watch the action at Sophia Gardens in the Welsh capital. Well done Alex, and we're pleased the result went your way given how far you travelled!

Cycled from London to Cardiff for #TheAshes2015. What did you do for your #mycyclingweekend ?! @roadcc @Morvelo pic.twitter.com/tdYCATfrww

Obviously the weekend wasn't all about cricket. While a few of us at the road.cc office might have caught an over or two (or almost all of them), we headed out on our bikes nonetheless.

Meanwhile, Simon Stansfield had came across an unusual breed of sheep, and Mark Cantwell took the reigns of the road.cc Instagram account and posted the fantastic showreel of his ride, which you can see below:

A video posted by road.cc (@road.cc) on

If you have any more photos of your weekend in the saddle, send them our way with the #mycyclingweekend hashtag clearly included in the tweet or Instagram post.

Keep your eye out this week for our RideCatcher feature, which could give you the inspiration or inpetus you need to really make the most out of your #mycyclingweekend next week.