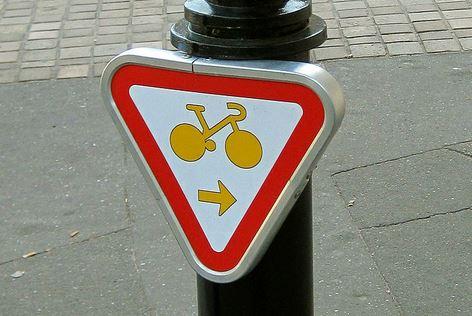 Cyclists in Paris are to be allowed to ride through red traffic lights following a successful trial of the concept that began in 2012.

Panels fixed to the traffic light will authorise cyclists to go straight ahead on a red light or turn right, depending on the configuration of the junction in question.

The news follows a trial that began in 2012 in the Canal St-Martin district in the north east of the capital, and which was subsequently rolled out to 30kph zones across the city.

Indeed, according to the city’s government, it removed conflict between bike riders and vehicles at traffic lights, and particularly those in which a driver has a blind spot.

Christophe Najdovski, deputy mayor in charge of transport, said: “Feedback was favorable during the testing phase conducted in the tenth arrondissement, and we have not seen any worsening of the safety of road users.”

Cyclists are reminded however that despite the relaxation of rules regarding red lights at applicable junctions, they must still exercise prudence and give way to motor vehicles as well as pedestrians.

When the pilot scheme was launched in 2012, Christine Lambert of the campaign group Mieux Se Déplacer à Bicyclette (MDB) said that that letting cyclists ride though red lights was sensible..

“Traffic lights are not a factor of security,” she said. “They were installed so that car drivers would let pedestrians cross the road, to regulate the flow of traffic and to moderate the speed.

“But bicycles don’t go fast and don’t make any noise. It’s idiotic to stop for nothing. You waste energy and it slows you down. The best safety assets for cyclists are your eyes and your brain.

“Some people think that the rules of the road should be the same for everyone but that is wrong.”
Similar initiatives are being trialled in a number of other cities in France including Nantes and Bordeaux, while laws permitting cyclists to turn right on a red light already exist in Germany and the Netherlands.

In 2010, former transport minister Lord Faulkner said that the Department for Transport would support proposals from Mayor of London Boris Johnson’s office to allow cyclists in the British capital to turn left at red traffic lights.

The Labour peer said: “We are ready to undertake a pilot if there is demand for it. We think that there is a lot to be said for there being at least an experiment on this, but we do not want to give cyclists the feeling that they are allowed to ignore red lights and just turn left or right when they think it is appropriate for them to do so; that has to be properly regulated.”

No such pilot was conducted in London, however, and left turning lorries continue to be the biggest cause of cyclist deaths in the city.