Giant’s redesigned-for-2016 TCR Advanced SL is an amazingly stiff race bike that’ll suit aggressive riders who prioritise all-out efficiency and super-sharp cornering in their efforts to get to the finish line first. 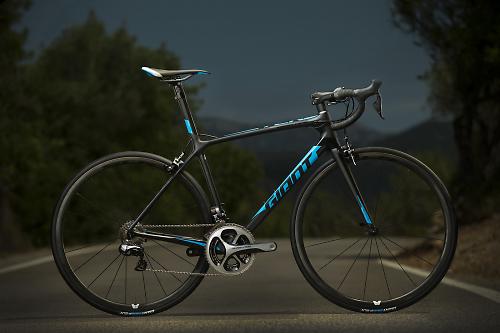 I spent a couple of days last week in Mallorca (or Majorca, if you prefer) at the media launch of Giant’s new bike. I was able to get a reasonable amount of ride time in on the TCR Advanced SL: 1.5hrs on Monday, taking in the 550m Coll d’Honor, then a few quick adjustments and 4.5hrs on Tuesday, including the 854m Puig Major. Each of those is a switchback climb with a similarly zig-zagging descent. We actually clocked up over 2,000m of climbing on that second ride. As well as all the ups and downs, I got some time on rolling terrain too. 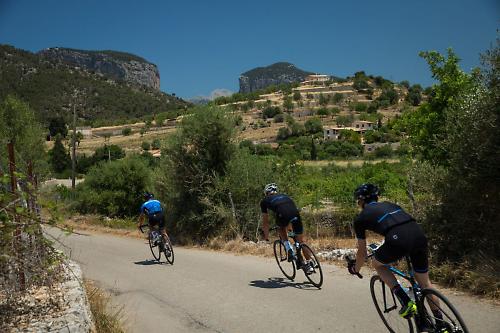 I’ve already written a story that essentially tells you what Giant think they’ve delivered with the TCR Advanced SL.

The key point is that Giant believes it has created a bike with the highest stiffness-to-weight ratio in its class. Giant’s argument is that although something like the Scott Addict SL is a little lighter, the TCR Advanced SL wins when stiffness is added into the equation. Go to that previous story for more context on that. What I can tell you from having ridden the TCR Advanced SL is that this is a very, very stiff bike for something this light. 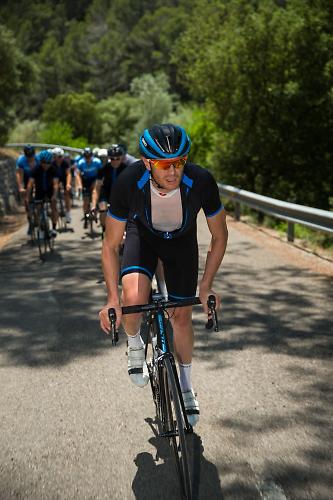 I was riding a large sized TCR Advanced SL 0 fitted with Shimano Dura-Ace Di2 components and Giant’s SLR 0 wheels (more on them in a mo). It hit the scales at 6.58kg (14.5lb) without pedals, so with pedals it would be round about the 6.8kg minimum weight limit for UCI-sanctioned racing. If you take a smaller size and/or cut the integrated seatpost short, you’ll obviously be looking at a slightly lighter weight. A medium model I weighed was 6.36kg (14.0lb) without pedals. That’s a very light bike. 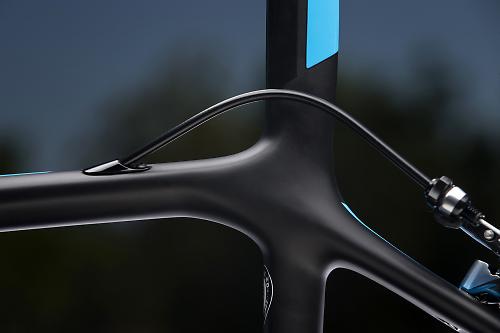 As we constantly point out, making a light bike isn’t difficult at all. Take any bike, go at it with a belt sander, and – hey presto! – the world’s lightest bike produced in the privacy of your own garage. Easy peasy. But it’ll be rubbish.

More realistically, any manufacturer could just reduce the amount of carbon they put into a mould and produce a lighter bike that way. The art is to use less material while maintaining the bike’s performance. That’s really difficult.

The TCR Advanced SL really is super-stiff. Jump off another lightweight race bike and onto this and I’d be massively surprised if you didn’t immediately notice the rigidity, especially through the centre. 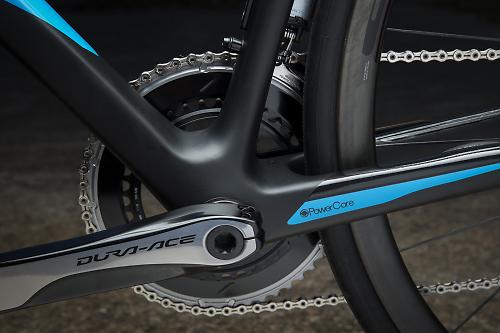 Giant use what they call their Powercore design, which is a hugely oversized bottom bracket and chainset area. The BB is 86mm wide and it’s held in place by a massive rectangular down tube. It looks solid and it acts solid. I’m a pretty big rider and I couldn’t knock it off line. 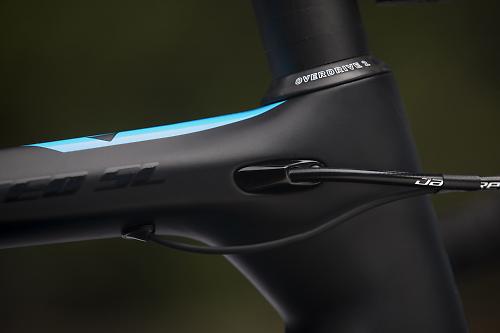 I really went for it up those climbs, mixing seated riding with out of the saddle stuff for the steeper bits, and that bottom bracket was just locked in place. It was the same deal when I put everything on the line for a sprint. Solid. If you’re a powerful rider who finds some bikes just a bit flexy when you get serious, give this a go. You’ll probably be surprised. 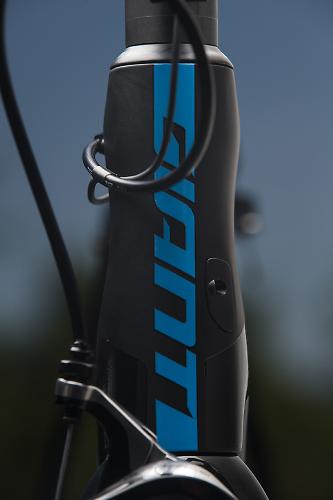 The front end feels almost as immovable. Giant use a 1 1/4in upper bearing and a 1 1/2in lower bearing for their OverDrive 2 system, and have moved that lower bearing up just a touch in order to put it more inline with the down tube. I couldn’t tell you how much difference that slight adjustment makes but the TCR Advanced SL does feel ultra-sturdy when you haul on the bar, that feeling doubtless intensified by the Giant’s hulking Contact SLR stem. 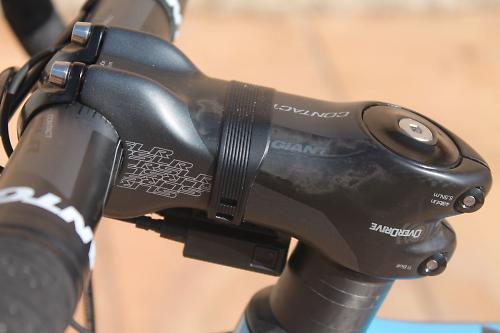 As I said above, we rode a lot of switchbacks on the launch, and the TCR Advanced SL handled them beautifully. Pick your line, lean the bike over and ping through. Point and shoot: it’s inch perfect. And if you want to switch lines to avoid something or someone, that’s cool too. I’ve nothing but good things to say about the Giant’s cornering skills. 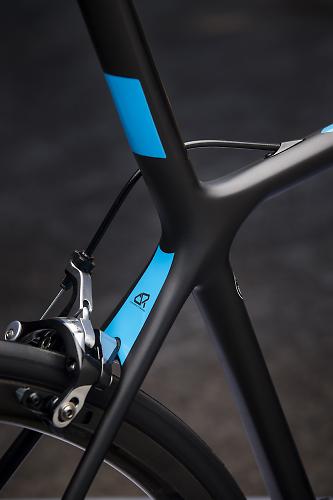 You do need to remember that this is most definitely a race bike. The riding position has been adjusted only very slightly over the previous generation TCR Advanced SL, and that means you’re going to be low and stretched. You can keep the front end jacked up with a bunch of headset spacers, but this bike is all about speed and efficiency so you’re not going to get a relaxed riding position.

Giant talk a lot about the amount of compliance offered by the new Variant integrated seatpost (and the non-integrated version on the Advanced Pro and Advanced). The designers say you get a ride quality “that balances compliance and efficiency”. Basically, if they provide too much potential for up and down movement you’ll lose efficiency when you’re pedalling from the saddle. Some of your energy will move the saddle very slightly as you pedal rather than going into moving the pedals, so it’s always going to be a matter of balance and compromise.

After a few hours on board, I would say that the TCR Advanced SL offers a ride that’s firm but by no means harsh. It’s not plush, but it’s not evil either. 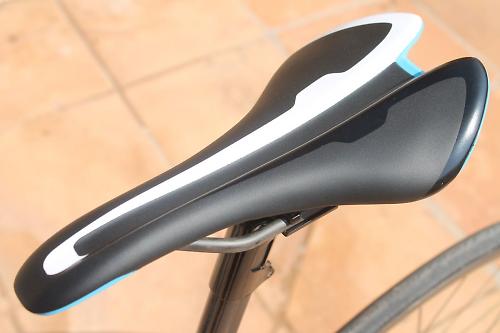 Of course, factors other than the frame come into play there, notably the saddle, and Giant have some new technology here. I was using Giant’s Contact SLR Forward saddle, one of a range that comes with the brand’s ‘Particle Flow Technology’. What’s that then? “Free-flowing particles are inserted into two separate pockets within the saddle structure,” say Giant. “The particles mould to the rider’s unique pelvic contact condition, reducing pressure points by more than 20 per cent and distributing pressure across a broader contact area.”

Giant have developed a dynamic test where you sit on a bike and pedal and a special saddle cover reveals where your pressure is concentrated, allowing you to choose the most suitable saddle for you. All the saddle selector systems we know of from other brands are static. The fact that Giant’s involves pedalling makes intuitive sense.

I was on an unfamiliar bike and unfamiliar roads so I wouldn’t like to comment too much, but initial impressions of that saddle were positive. It felt a bit like a gel saddle, but more so… if that makes any sense. Supportive but not squishy. Giant say that, like the frame, these in-house manufactured wheels are all about efficiency: “With Giant’s breakthrough Dynamic Balanced Lacing approach, opposing spokes have different levels of tension when the wheel is static. But when a rider applies pedalling force as the bike is being ridden, the spoke tensions balance out. This improves a wheel’s transmission stiffness, which increases efficiency.”

Giant say they have also increased the bracing angle of the spokes in the front wheel and the driveside of the rear wheel by altering the design of the hub flanges. The idea is to produce more lateral stiffness for better tracking and control. I had the SLR 0s in a 30mm depth (they’ll also be available in a 55mm version) and they complemented the TCR Advanced SL’s ride very well. They’re quick to accelerate and feel stiff through the corners, although it’s hard to separate their performance from that of the rest of the bike. Braking was good too, although conditions were bone dry so I couldn’t tell you how they get on in the wet. We don’t have a UK price on those wheels yet but we do know that they’ll be US$2,300. Cheaper options will also be available in the range. 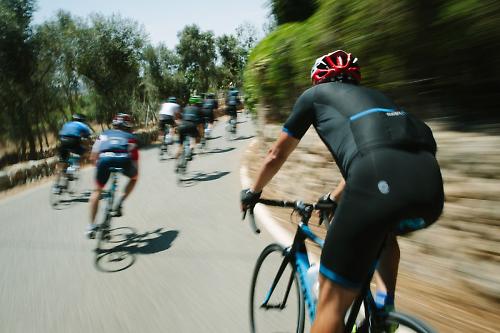 To sum up, I’d say that the Giant TCR Advanced SL rides like it’s supposed to. It’s a full-on race bike and that’s how it feels out on the road: fast, efficient and very reactive.