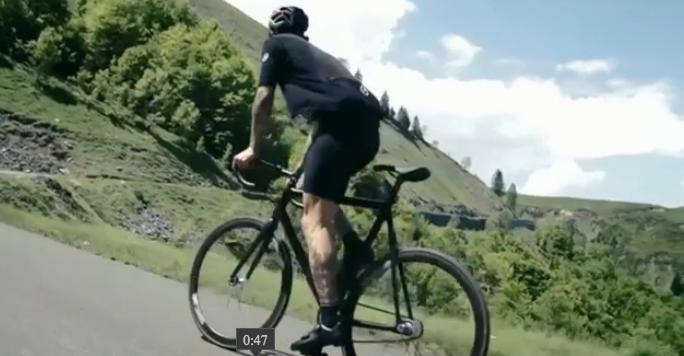 Just 12 hours to conquer 5 peaks... The man with legs of steel
by Sarah Barth

Live the nearly never-ending pain of riding the Pyrenees on a fixie in this new video, in which Swiss cyclist Patrick Seabase takes on five Pyrenees passes, 309 kilometers and more than 7611 meters in altitude on his fixed gear bike in a staggering 12 hours.

In an homage to the legendary 1910 Tour de France stage, the ride begins under a full moon at 4am with the monstrous Col de Peyresourde.

Seabase told SBS the achievement felt easy: "I felt as if somebody was pushing me up that mountain. After five kilometers with an moderate ascent, there were 12 kilometers with a gradient of 8 to 12 per cent," he said.

"Still, I made it up there better than I had expected."

The former German cycling pro Danilo Hondo was with Seabase throught the journey, a fact that Seabase credits with his success.

"From the beginning, I had to remind him to eat and drink enough, not to start out too fast, and finally I had to help him on during those dark moments by telling him that the next flat stretch was coming up and he would be able to recover," Hondo said.

"I really don’t know how I made it here.For the first time in my life I had doubts as to whether I was good enough, whether I would be able to achieve what I had planned," Seabase said.

"The Osquich was really getting me down. Afterwards, my legs felt as if somebody had been beating them with a cudgel.

"What did those pioneers that cycled this stage in 1910 do to themselves?"

"I am the kind of guy who likes reaching his goals. This has been the first time that I have announced an accomplishment beforehand, this has put me under additional pressure, and I am extremely glad that I have made it."