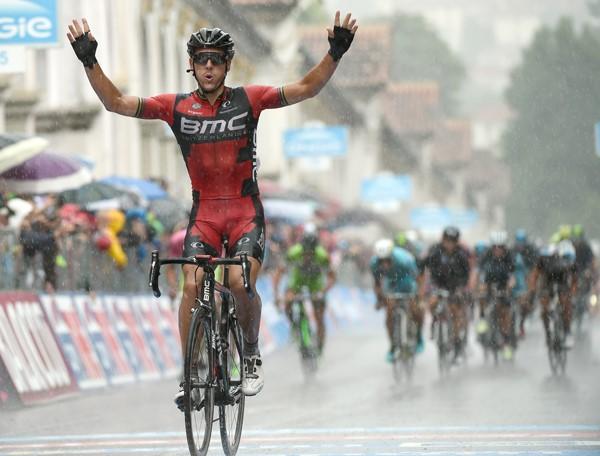 Alberto Contador of Tinkoff-Saxo has stretched his lead in the Giro d’Italia to more than a quarter of a minute, finishing second to BMC Racing’s Philippe Gilbert on a tough uphill finish in Vincenza to claim 6 bonus seconds.

Astana’s Fabio Aru, 3 seconds down on Contador this morning at the start of the 190km stage from Imola, crossed the line 8 seconds behind the Spaniard, who now has an overall lead of 17 seconds.

Aru’s team mate, Mikel Landa, lies third, 55 seconds down on Contador following a stage that like yesterday was played out in the rain, causing problems for a number of riders.

Those included OricaGreen-Edge's Simon Gerrans - the first man to wear the race leader's maglia rosa in this year's race - who would have fancied his chances on the 1.2km climb to the finish, but lost contact with the main group after crashing on a climb 30km out.

The first two thirds of today's parcours were pan flat as the race headed across the plain of the River Po, with 53km covered in the first hour.

But the final third had a jagged profile with two categorised climbs ahead of the final ramp a number of other sharp kicks uphill that didn't count towards the mountains competition.

Movistar's Benat Intxausti was out in front in the second of those categorised ascents as he sought to consolidate his lead in that contest.

Coming to the foot of the final climb it was Androni Giocattoli's and Astana's Tanel Kangert who had an advantage of 20 seconds or so over the maglia rosa group.

Tangert shook off the Italian, but the group was closing fast, and as the road steepened towards the line he was passed by Gilbert with around 100 metres remaining.

Meanwhile Contador grabbed those extra seconds that leave his rivals in no doubt that he has fully recovered from last week's injury.

Gilbert revealed afterwards that he had taken a close look at today's stage.

He said: "The team did a great work today. Yesterday too we worked but the stage was too hard for me, and I was frightened of losing my team-mates’ confidence.

"But at our meeting before the stage we decided to give it everything today. I came to look at this stage after Milan Sanremo, and I knew every detail of the final 70km.

"Fabio Baldato was in the team car, giving encouragement and information. The finish was very hard, and the weather was horrible - not cold, but wet - but the final 400m went perfectly. It’s a great feeling."

Contador added: "It was another very hard day. We rode the first 2 hours at about 50 kph, then the rain started. The peloton broke apart with the high speeds, but I had good legs.

"Philippe Gilbert was very strong on the final climb, but I was thinking of the General Classification and I’m very happy with the outcome today."