To IceBike in the frozen wastes of Milton Keynes, more rainy than frozen actually
and what did we see? Among the many lovely items on display we glimpsed the future of cycling that's what and it's got drop bars, cross tyres… and a hub gear. It hasn't got a name yet but the Genesis [insert name here] will be coming to a bike shop near you in 2011.

IceBike is where the UK's biggest bike and bits distributor, Madison, show off what's new and what's coming to the bike trade, it's their in-house show held in their car park - this year in a two-storey tent and they've got enough brands to make it more interesting than some shows you'd have to pay to enter.

Okay, calling the Genesis no name the future of cycling is maybe over-egging it a bit, but this is a bike to get excited about if not the future of cycling it's certainly a future of cycling – the birth of a new category of bike. Since Versa brought our their VRS-8 integrated drop bar lever for hub gears we've seen a couple of examples of commuter road bikes built up matching them up with Shimano's 8-spd hub. These seem to us a great commuter option offering the advantages of a reasonably low weight road bike with low maintenance too. 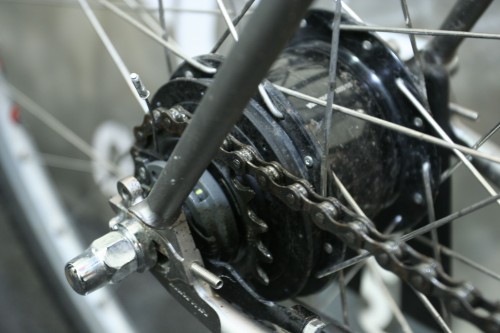 This new Genesis will take things a stage further using the Day One Cross frame increases the range of the bike to take in light off roading, yes, and even 'cross - the gearing on the 39 - 20 gearing on the prototype bike should get you up anything - as a 'cross bike. Genesis designer James Olsen said he was able to ride this one where he would be carrying his drop bar Day One (we were carrying our standard 42-18 geared test machine rather a lot). Swap the cross tyres off for road ones and you should have the makings of a lovely little commuter bike, winter hack or just do anything bike. The prototype shown here has V brakes but the production version will come with Tektro cable operated ball bearing discs, similar to those on the Croix de Fer cyclo cross bike. James reckoned the bike would work just as well with either brake set up but thought that for the small extra cost involved disc brakes would be more attractive. Certainly from both a cross and commuting friend they take things to another level in terms of low maintenance. And yes of course disc pads wear out, but pretty slowly on the road we'd guess and you've still got the added benefit of no rim wear.

What makes this even more interesting is the thought of such a bike with the new Shimano 11-spd Alfine hub on it, then you have the prospect of a low maintenance road bike with a real performance edge. Nice. We reckon that would appeal to a lot of people - are you listening Shimano?. As yet Shimano don't make an STI lever that works with either the 8 or the new 11spd Alfine. Shimano were at the show, and we're told they paid that Versa lever a great deal of attention, they also heard from numerous people including bike shops owners that they would like to see an 11 spd Alfine STI lever. If anyone from Shimano is reading this here's our two penn'orth: DO IT!

Those Versa levers have proved pretty durable James has put them through a winter of hard riding in to work and off road plus the resulting jet washing with no ill effects and in the absence of any Shimano drop levers that will do the job the production model will come with Versa levers too. As mentioned the frame itself will be the Day One 520 frame with a beefed up chainstay for the disc brake.

Expect to pay between £900 and £950 and the Genesis [insert name here] should be hitting the shops some time this autumn - it'll have a name by then… although we quite like Genesis No Name.

Aside from that prototype it was pretty much as you were on the Genesis stand. There was news of 2011 plans: the gearing may be tweaked on the Day One drop bar, and the flat bar bike may come with semi slicks or even slicks; expect also to see a higher spec'd version of the Equilibrium sportive/long haul steel bike, and a Shimano 105 version of the Aether 'cross bike targeted at the £100 Cycle to Work price limit, well technically just below it.

Plus later we heard rumours of another prototype singlespeed hidden away somewhere on the premises – this time one specifically designed for the road, but rumours only. Mr Olsen was keeping schtum about that one. Although if the 2011 production date we were told about is true we'd expect to see something soon… keep your eyes peeled in the Cotwolds.