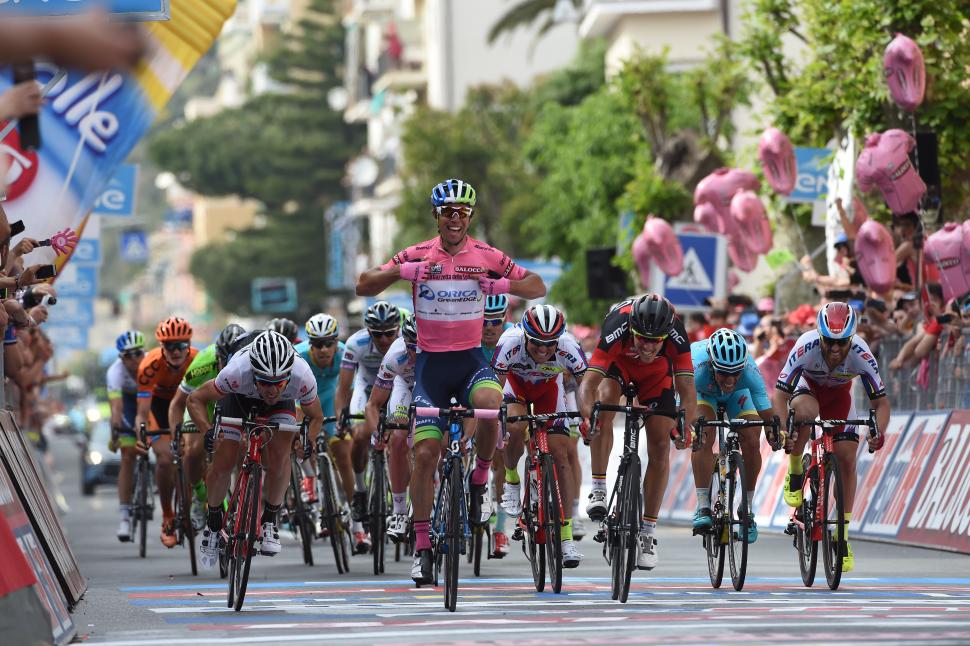 Michael Matthews of Orica-GreenEdge has repeated his achievement from last year’s Giro d’Italia by once again winning a stage while in the race leader’s maglia rosa. 12 months ago, the Australian won Stage 6 of the race at Montecassino, while today’s victory took place in Sestri Levante as the race continues its progress through Liguria.

Matthews was given a terrific lead out by team mate Simon Gerrans, winning the sprint from a reduced front group following a short but tough stage that was ridden at a fast pace in the mountains above the Ligurian coast.

After the stage, Matthews said: "After the Team Time Trial win, today was another big target for us. We reconned the stage last week so we knew what to expect, and we pulled it off. We did very well to get two guys into the breakaway.

"The stage was quite hard, and I tried to get to the foot of the final climb near the front so that I could drift back to save some energy. Simon Gerrans worked very hard to position me for the sprint. The Giro d'Italia so far is a dream come true for me."

Asked if it was something special to win while wearing the maglia rosa, he said: "Oh yeah!"

With around 40km remaining of the 136km stage from Rapallo, AG2R’s Domenico Pozzovivo crashed very hard on a descent.

TV images of the Italian lying prone on the ground could not help but evoke memories of Wouter Weylandt, the Belgian rider who died as a result of a crash on Stage 3 of the 2011 race, around 15 kilometres from where Pozzovivo came down today.

The AG2R rider, who was strapped into a stretcher and taken to hospital, was reported by his team afterwards to be conscious and lucid, with his injuries not believed to be life-threatening.