GPS specialist TomTom is taking aim at GoPro with the launch of its new £299.99 Bandit action camera, which offers easy editing from your smartphone and shoots full 1080p HD video at 60fps and boasts integrated motion and GPS sensors.

TomTom is clearly trying to offer a very easy to use video camera that makes editing and sharing videos a cinch. It’s easy to record a ton of footage with an action camera, but wading through it all to produce a short edit of the most exciting moments can be very time-consuming. The Bandit has a built-in media server, which sends data to the Apple or Android app, and means you don’t have to plug the camera into the computer, allowing videos (or edits as they’re commonly called these days) on-the-fly. 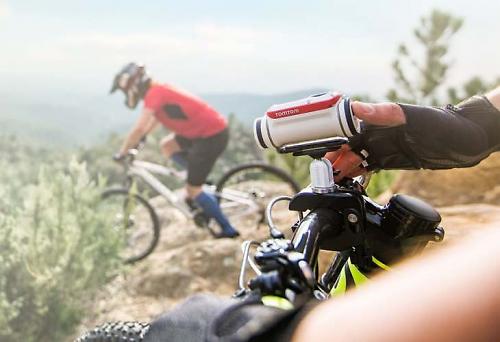 The Bandit camera, rather cleverly, features a button on the rear of the camera that, when pressed, ‘tags’ the video. Tagging can also be automatic: using speed or heart rate, with a Bluetooth heart rate monitor, you can set the camera to automatically tag high speed or high heart rate moments during a ride. There’ll be a remote with a start/stop and tag button as well. Finish the ride and these tagged highlights can be edited on the smartphone app, either by ‘shaking’ the phone to arrange the video clips, or doing it manually. Graphics and titles can be added to the video, as well as speed and distance data from the array of sensors. Once you’re happy with your video edit, the smartphone app will share it with the world. All without having to download loads of video to your computer.

Of course, you can still download the entire video to your computer if you want more manual control of the editing process. The tagging feature makes it a doddle for people that just want a super easy way of sharing their rides with friends without all the hassle of being an expert at video editing. The smartphone app can also be used as a live viewfinder to help set up the shots before you ride.

“With all existing action cameras you first need to download gigabytes of footage to a powerful PC, a process that can take a long time. Then you need to find the highlights, put together a story and format it,” says Slobodan Stanisic, lead engineer at TomTom. 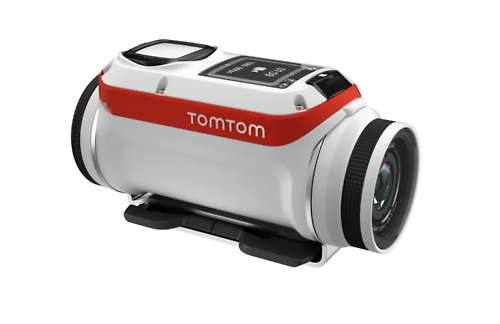 “We know this often takes hours. Not with the TomTom Bandit. We have designed a camera where the footage is processed on the camera itself, making the editing process far easier and much faster.”

The Bandit is a barrel-type camera and houses a USB plug inside, so you can plug it straight into your computer for downloading footage, and charging the 1900mAh battery - which is good for 3 hours of HD video.  The Bandit houses a 16MP sensors and records 1080p at 30 or 60fps, 720p at 60 or 120fps, 4K at 15fps and slow motion, time lapse and still photos. 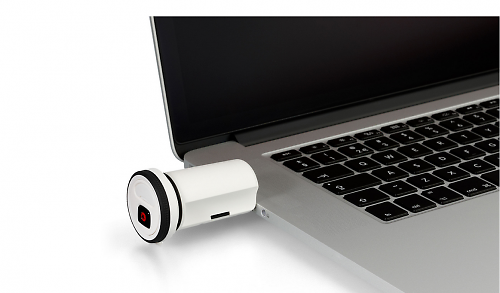 The Bandit is rated to IPX7 so it’s waterproof, and like the new Virb doesn’t need a separate case to be waterproof. There’s a small screen on the top with a four-way button to navigate through the various menus and settings. The camera will come with its own selection of mounts and there is an adapter to use it with GoPro mounts. That’s a smart idea, because there are a lot of aftermarket GoPro mounts. The camera weighs 190g and uses a microSD memory card.

There’s a lot of competition in the action camera market and while it might seem like GoPro have it all to themselves, we’re seeing plenty of new video cameras introducing smart new features, and the tagging and easy video editing of the Bandit makes it a very compelling action camera for those that want to spend less time editing and more time riding and sharing ride videos.

The Bandit costs £299.99 and is available now from www.tomtom.com