Alex Dowsett speaks ahead of Hour record attempt on Saturday

Movistar rider aiming to join some of cycling's greats at Manchester velodrome this weekend...
by Anthony Collins

Alex Dowsett is taking on the UCI Hour record on Saturday. You can watch it live on Eurosport 2, with coverage starting at 1245, and the 26-year-old has been busy riding the boards in Manchester this week in preparation for his attempt. Tony Collins spoke to the Movistar rider yesterday ahead of what Dowsett hopes will be a ‘Perfect Hour’ this weekend. Here’s what he had to say.

The UCI's change of rules for bikes eligible for the Hour record has resulted in a whole queue of riders wanting to have a go.

First dibs was granted to Jens Voigt as a parting gift from his Trek Factory Racing team for his retirement after a long and likeable career.

Since then the bar has been raised by IAM’s Matthias Brändle and current holder Rohan Dennis of BMC Racing, who set a distance of 52.491km, with Jack Bobridge and Thomas Dekker both failing in their attempts.

Next in line is Britain’s own Alex Dowsett, and road.cc caught up with him as he started his preparation at The National Cycling Centre in Manchester.

Dowsett recalled that as a young time triallist he was aware of the Hour through Chris Boardman's exploits but that he hadn't then been inspired to one day attempt it.

Now that he can use a Canyon Speedmax WHR prototype bike track bike which near enough matches his lo-pro TT bike in riding position, it has become a more attractive proposition. 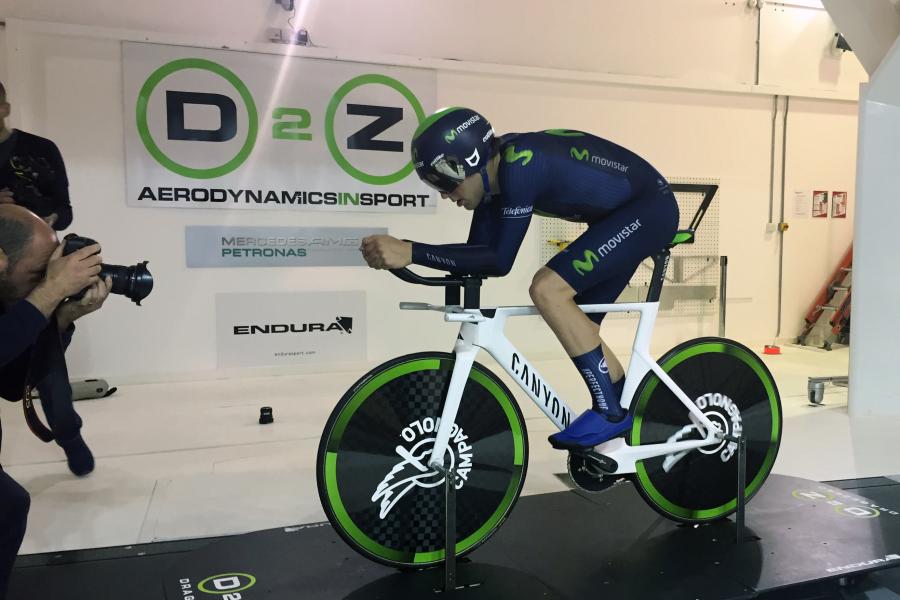 He said that apart from chatting to Brändle about his ride and watching video, he hasn't sought advice from past Hour champions or read their memoirs; rather he has avoided conversations telling him it will be the hardest hour of his life.

He is under no illusion that it will be grim though and the training blocks on the track at record pace don't compare to a road time trial where there is always some brief respite from a gear change or downward gradient.

All training for the last few months has been focused on the Hour, working on aerobic threshold and strength, blocks of zone 3 on the road and specific track work. 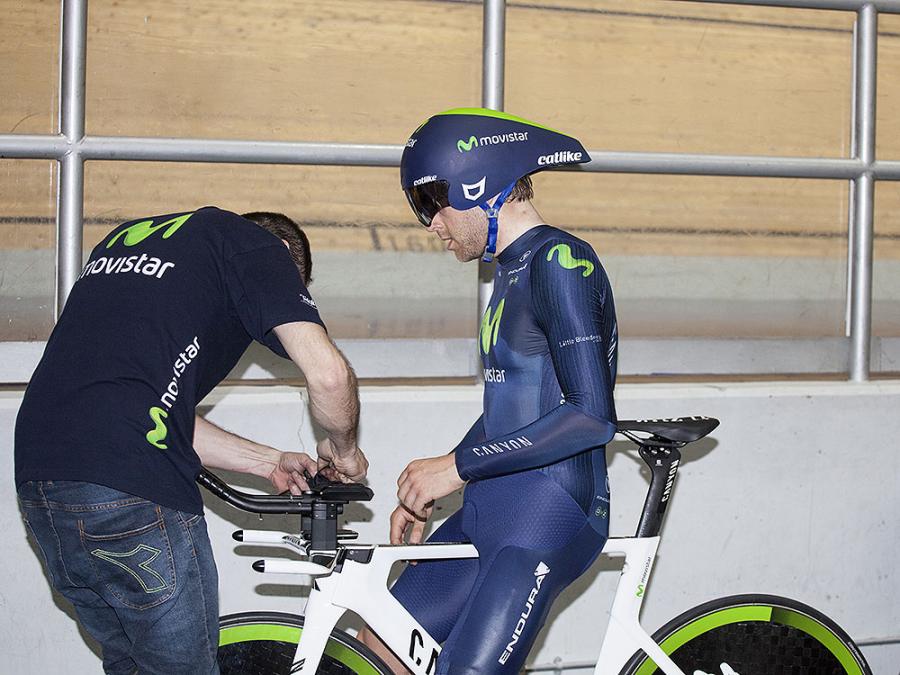 His attempt on the record was initially scheduled to take place in London at the end of February, but a collarbone fracture following a crash in training put paid to that.

Asked if the delay to his plans caused by his broken collarbone had given him more time to prepare, he said: "I was absolutely on top of everything pre the bone break and it's not been easy to get that momentum back but I'm in a good place now".

Prior to the intervention of his collarbone, Dowsett’s intended ride date was only two weeks after Dennis's record-breaking ride, so there has been a benefit in having a longer time knowing the marker to aim for.

On his recent spell of wind tunnel testing, Dowsett joked that he had hoped to come out the other end with a miraculous extra 30 watts but aside from testing skinsuits and minor tweaks to position the figures, he confirmed that his time trialling position developed on the road has very little room for improvement.

The key point to take away is that Dowsett can continue using a familiar position that he can comfortably hold for an hour – one that has brought him national time trial championships, plus a Grand Tour time trial stage win at the Giro d’Italia in 2013. Admittedly, the Hour record has a lot of baggage with its roll call of great names from the past.

But Dowsett is no sentimentalist when it comes to cycling history and when asked whether he is curious about how he would perform under the UCI's previous formula mimicking Merckx's steel framed bike, he said that he wasn't interested.

"I'm more interested in the here and now to be honest ... I get more excited seeing Matthias and Rohan go for their records"

To the question of how to keep focused to ride for an hour without letting up, he has a playlist for the PA but will be concentrating on his schedule with someone walking the line to indicate if he is ahead or dropping every 17 second lap, as well as relying on the commentator's reports,

He says though that during all his time trials he is always calculating how long, how far, though without power or speed data in front of him on the track it will be a case of watching the laps count down.

With a band of other elite time triallists booking slots to have a crack at the Hour, Dowsett was asked if he thought that those without a pedigree in track riding might have a rude surprise. Laughing, he said he hoped so.

Referring to the recent exchanges between Tony Martin and Fabian Cancellara he said: "Cancellara said that the record is too small time when Jens went for it which is a bit unfair.

“Rohan's track pedigree is phenomenal so I wouldn't mind betting that Cancellara would have trouble matching what Rohan [or] I can do and ultimately what Brad [Wiggins] does." Central to Dowsett’s attempt at the Hour record is make people more aware of haemophilia, a condition which he has but definitely wouldn't say that he "suffers" from.

"The campaign was simple: just to raise awareness and promote a healthy and active lifestyle within the haemophilia community.

“What I realised quite quickly though was the impact my story was having. As a young haemophiliac things were tough, even more so for my family than I.

“There was only a predicted gloomy outcome, talk of wheelchairs, crutches, joints fused in place or replaced, a far cry from the Alex you see before now.

“On these trips I saw my story was spreading hope: their boy or girl could in fact lead an ordinary life. So I thought: what more can I do to bring a positive outlook on the future to them, alongside my own personal career ambitions? Everyone understands a world record, so I wanted my next target to be the hour record."

Apart from having to take daily medication, injected with a special dispensation from the UCI, Dowsett doesn't let his haemophilia affect his career as a competitive cyclist. He does say though that everyone else panics if he has a crash.

So off, then, to reacquaint himself with the Manchester track where he rode earlier in his career.

No drama to report, several blocks at pace with breaks to make adjustments to bar extensions and do lactate testing.

It’s interesting to see that his temperature was being monitored by a thermal imaging device, perhaps his team are worried about the possibility of spontaneous combustion? 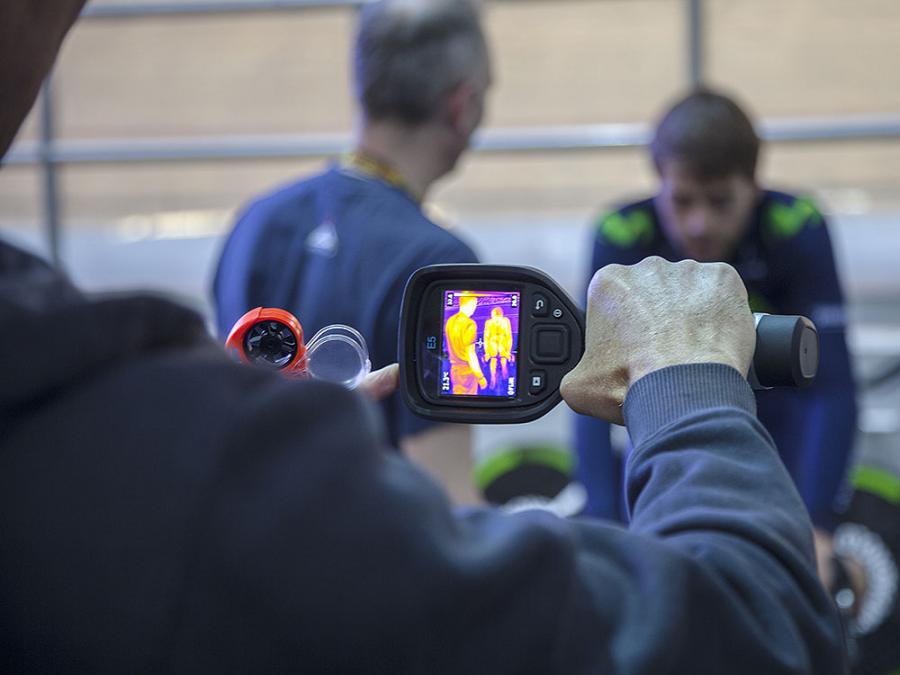 1
Five cool things coming soon from Garmin, Canyon, Continental, Mavic and Ale
2
Aldi is selling a folding bike for £300 – but if you want one, you’d better act quickly!
3
Near Miss of the Day 449: Cyclist gets very close pass from driver of bus ... operated by company that has given its drivers close pass training
4
Cyclist killed after hitting bollard meant to stop motorists driving across bridge on popular Devon trail
5
The average cyclist? Male, in his 40s, rides six times a week and 1,000 miles a year
6
Updated: UCI condemns Dylan Groenewegen as Fabio Jakobsen fights for his life after horrific Tour de Pologne crash
7
Fabio Jakobsen “stable” after overnight surgery following horrific Tour de Pologne crash
8
Woman injured by hit-and-run driver while cycling with daughter, aged seven