The family of a cyclist killed when he was hit by an HGV in South London is considering civil action after an inquest returned a finding of accidental death.

On Monday, November 18, 2013, Richard Muzira, 61, was dragged under the wheels of a tipper truck which was turning left from Camberwell Road to Albany Road, London.

An air ambulance attempted to save the father-of-four but he died on the way to hospital. He was the six cyclist killed in London within a two week period.

No prosecution has been brought against the driver of the tipper truck. The inquest into Mr Muzira's death, held at Inner South London Coroner’s Court recorded the cause of death to be ‘Road Traffic Collision’. 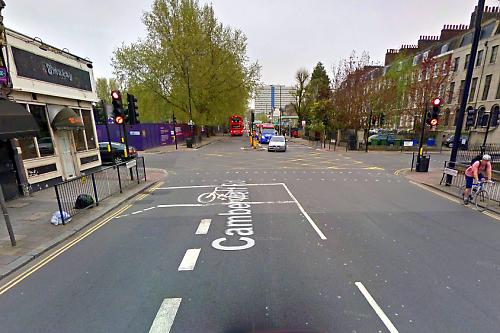 The junction where Richard Muzira was killed in 2013

His ex-wife Jane Henderson, 57, said in a statement: “Richard was a beloved father and a friend to many in the community through his voluntary work. He believed passionately that people should be able to contribute something to their community.

“The knowledge that people together could make the world a better place was enough for him. We are all devastated by his loss when he still had so much to give."

Originally from Zimbabwe, Richard Muzira had been imprisoned and tortured in his home country before fleeing to the UK. He was described as a “local hero” and a “wonderful man” who had won an award for his voluntary work.

His daughter Niadzi, a 24-year-old web-designer, said: “I’m so proud of my dad. He wrote books, plays and poetry, he was a bit of a maverick. He was always very active learning and teaching himself.”

Mr Muzira had volunteered for many years at mental health charity CoolTan Arts. The organisation’s chief executive Michelle Baharier, said: “You couldn’t ask for a more lovely person than Richard. He was a fantastic friend. He was really community-spirited and was a complete and utter intellectual. He was a very calm and really astute person."

Ms Henderson said that Mr Muzira was a safe cyclist, who did not ride at excessive speeds and always respected other road users and the dangers around him.

She said: “Despite this he has become another cyclist killed in an area of London that has a history of collisions and fatalities. And while TfL has invested in projects and countermeasure aimed at reducing lorry danger, more needs to be done, as seen by the continuing loss of life.

“Cyclists are terribly vulnerable on the roads and more needs to be done to protect them. This includes at the junction where Richard was killed where other cyclists have been injured.”

Mr Muzira’s family has now instructed law firm Slater and Gordon to investigate a potential civil action against the driver of the lorry.

Paul Kitson, specialist cycling injury lawyer at Slater and Gordon, representing the family, said: “Sadly we continue to be involved in a significant numbers of cases were cyclists have suffered serious injury or loss of life on the roads.

“One of the reoccurring themes we see is the high number of fatalities in which a heavy good vehicle is involved. It is clear we need to educate road users and build appropriate infrastructure to protect pedestrians, cyclists and motorists from further fatalities.”

So far this year five cyclists have died in collisions with motor vehicles in London. HGVs have been involved in all five, and four involved construction vehicles similar to the one that killed Richard Muzira.