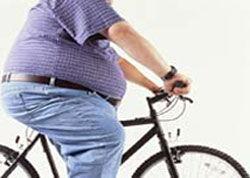 US study finds nations that cycle and walk more are thinner, er… shocker!

Man! I wish I was that clever…
by Tony Farrelly

A study by two US academics has concluded (all right, re-concluded. Okay, let's make that stated the bleedin' obvious) that countries whose populations use more acive forms of transportation are thinner than countries that don't.

The study by the University of Tennessee's David Bassett and John Pucher of Rutgers, shows a pretty much irrefutably strong correlation between the way a country gets around and the weight of its population just in case anyone still harboured the fond thought that driving might be slimming just because Lewis Hamilton is invisible side on.

According to the study's figures the average European walks 237 miles and cycles 116 miles per year, by comparison in the US they walk 87 miles and cycle 24. In fat burning terms that translates to five to nine pounds per year for Europeans and two pounds for Americans. To underline their point Bassett and Pucher point out that the Swiss walk an average of 9,700 steps per day, compared with 7,200 for the Japanese, and 5,900 for residents of South Carolina, USA. And, as we're sure you've guessed, even with their artery clogging diet Toblerone and fondue diet (okay, they do eat muesli too) the Swiss are the skinniest in that particular pack.

No word on where the Brits came in the fat league table, you have to pay for that sort of top line data and we didn't fancy shelling out from the road.cc cake fund to be told that we're in front of Canada (in a good way), but not by much.