Trek has issued a voluntary safety recall affecting almost 1.7 million bikes in North America and the EU. These are bikes with front disc brakes and the issue involves the quick release skewer. Non-Trek bikes are affected by the same safety issue although they are not subject to the recall.

According to the United States Consumer Product Safety Commission, the issue is that, “An open quick release lever on the bicycle’s front wheel hub can come into contact with the front disc brake assembly, causing the front wheel to come to a sudden stop or separate from the bicycle, posing a risk of injury to the rider.”

There’s no problem if the quick release mechanism is closed correctly, only if it is improperly adjusted or left open. In that situation the quick release lever can become caught in the front disc brake assembly because it opens past 180° (see Figure 1 and Figure 2 below).

Trek have reported three incidents resulting from this, all causing injuries. One incident resulted in quadriplegia, one resulted in facial injuries, and the third resulted in a fractured wrist. 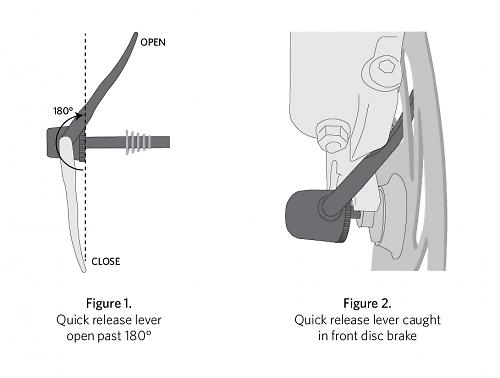 “This recall involves all models of Trek bicycles from model years 2000 through 2015 equipped with front disc brakes and a black or silver quick release lever on the front wheel hub that opens far enough to contact the disc brake,” says the United States Consumer Product Safety Commission. “Bicycles with front quick release levers that do not open a full 180 degrees from the closed position are not included in this recall.”

Bikes involved range in price from US$480 to US$1,650, or the equivalent in non-US markets.

What should you do if you think your bike is one of those covered by the recall? You should take it to an authorised Trek dealer who will replace the front quick release free of charge. You will also receive a £15 voucher for use on Bontrager items, valid until 31 December 2015.

Here’s a Trek video that shows you how to use a quick release without washers correctly.

And here’s now to use a quick release with washers.

The quick release skewer involved is not exclusive to Trek so it could be that other brands issue a similar recall in the near future. The skewer is a bike industry standard referenced as QR11 across anyone who makes that design.

For more info go to www.trekbikes.com.