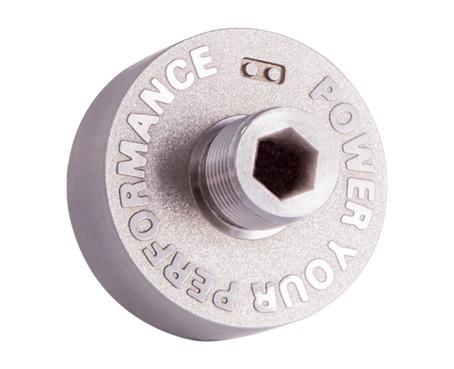 A power meter called Limits has today started looking for funding on Indiegogo, a contribution of US$249 (£167) securing you a unit when it becomes available in December. That makes it highly affordable by current power meter standards.

The Limits power meter is unique in that it’s a CNC machined cromoly device that fits between your crank and any standard pedal (9/16th x 20tpi axle). You remove the pedal, screw the Limits devices into the hole, and then tighten the pedal onto the Limits. The system is designed to work with any frame, crank and pedal, and you don’t need to replace any existing components.

The Limits power meter measures your cadence using an inclinometer (so there’s no need for a magnet) that, according to the designers, can detect rotational change of less than 1°, while strain gauges measure the force you’re applying and use that, along with crank length, to work out torque.

The system uses this information to calculate your power and sends it to a head unit via ANT+. That means the system is compatible with Garmin Edge computers, for example. The team behind Limits says that future versions will offer Bluetooth Smart compatibility as well.

The designers say that the Limits power meter has IPX7 water resistance, meaning that it can be submerged a metre under water for half an hour. Probably more relevant, it can withstand heavy rain. They claim that Limits will compensate for temperature variations so the accuracy of the data you get won’t be affected by the weather. They also say that you’ll only need to replace the coin cell batteries yearly.

The unit will retain your data even if there’s a drop in communications or your head unit runs out of juice.

What if you come off your bike?

“Limits is engineered to be robust and won’t break even if you crash,” according to the Limits team. “The housing is highly shock-resistant and has been developed to ensure that it is extremely durable.”

The initial version of Limits is single-sided. Like a Stages system, it measures force on just your left leg and bases your total power on that information. The team behind Limits say that future versions of the product will measure power from each leg independently so they will be able to provide left/right balance.

The question everyone always wants answered when it comes to power meters is: how accurate is it? The claim is ±2%, which is the same as Garmin and Stages claim for their systems.

The claimed weight is 47g. The Stages system adds only around 20g to your bike.

The other issue that immediately springs to mind is the effect that the Limits system will have on your Q factor – the distance between your pedals.

“Limits has been used by a number of the Spokes Racing Team and Club Members generating positive feedback with many of the cyclists reporting an improvement in foot position leading to an improvement in comfort, especially over longer rides,” say the team behind Limits.

“Analysis of this feedback highlighted that many cyclists’ knees track outward at the top of the pedal stroke adding unwanted stress on the knee and splaying the power outwards on an inefficient vector relative to the pedal travel. This outward tracking is typically addressed by adjusting cleat position or/and adding spacers between the cleat and shoe to intentionally narrow the knees all the way through the pedal stroke, but this over recruits the stabilizers to track the knee on a unnatural plane.

“Good pedal action involves as straight a vertical tracking of the knees as the rider’s physiology permits. Limits allows the cyclist to ride with a stance width that is comfortable and so allows the knee to track on the most vertically linear path as possible. It stands to reason that this action will put power directly down through the pedal.”

For more info go to the Limits Indiegogo page or http://limits.technology/technology/.