Michal Kwiatkowski broke the curse of the rainbow jersey by winning the sprint in the finale of the 50th edition of the Amstel Gold Race at the weekend.

The 24-year-old Ettix-Quick Step rider is one of the new wave of young professional cyclists regularly using Strava to share his training and race data. After the prize ceremony and presumably a shower and some food, he shared his winning ride on the social training website. You can view it here, it makes for some interesting reading. 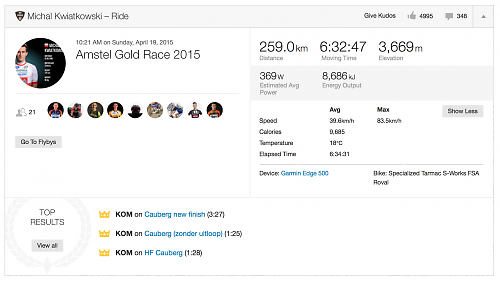 The Amstel Gold Race is a long race at 259km and dispels the myth that Holland is flat, with 3,669m of climbing. The distance and climbing will have contributed huge levels of fatigue by the time the race hit the final ascent of the Cauberg for sure. Kwiatkowski had to dig deep into his reserves, first following the attack by Philippe Gilbert on the Cauberg, and then having just enough time to recover as the bunch came back together and swamping the two breakaway riders, Gilbert and Michael Matthews, and timing his sprint to perfection to cross the line first. His efforts in the race burned through an astonishing 9685 calories - he’ll have needed to drink a few of the race sponsors beers to replenish those expended calories.

It was a fast run race too. Kwiatkowski raced around the route at an average speed of 39.6km/h and maxxed out at an impressive 83.5km/h, taking just 6 hrs 32 mins 47 secs to complete the race. His average power, as estimated by Strava so worth taking with a pinch of salt, was 369w.

His ride is popular on Strava. At the time of writing he has received 4990 kudos and 348 comments. You can see the Strava activity here.

You can check out Michal Kwiatkowski’s custom world championship Specialized S-Works Tarmac bike in this article. He rode the latest Specialized Tarmac but there are a few changes to the bike he was riding last year, as the team have now moved from SRAM and Zipp to Shimano and Roval for groupsets and wheels respectively. FSA has also stepped in and supplies the chainsets, handlebars, stems and seatposts.