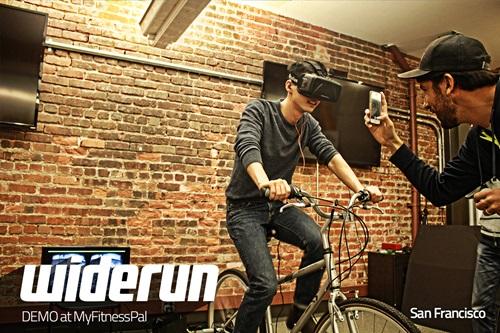 Maybe you’re bored of staring at the wall while using your turbo trainer. Maybe you’re tired of riding the same familiar roads. Or perhaps you just need the incentive of being pursued by a zombie to drive you to greater efforts. Whatever your motivation, if you fancy taking a bike ride in a virtual world, the Widerun virtual reality bike trainer might be of interest.

It doesn’t have to be a fantasy videogame style challenge, however. You can also ride through virtual reality versions of unfamiliar real world places. You could, for example, spend some time riding up and down the hills of San Francisco, or you could ride a stage of the Tour de France, perhaps challenging a friend to race you.

But zombies make for a funnier video. Here’s some footage of the horror environment. The first zombie sighting’s at about 3m20s.

Other fantasy environments include a medieval village, a Chinese landscape strewn with cherry trees, abandoned ruins, a tropical island and Middle Earth.

Widerun makes use of Oculus Rift, a head-mounted virtual reality display. The bike trainer transmits the speed, meaning acceleration is accurate within the virtual world and there is also a digital compass which delivers data from the steering component. The system will also regulate resistance on the rear wheel according to your position in the 3D virtual reality world to ensure an immersive and realistic experience.

The project is being launched via Kickstarter and at the time of writing had raised £12,000 of its £30,000 goal with 26 days to go. For £300, you get the full trainer kit, including access to all current virtual reality worlds and any future worlds created by the developers. Oculus Rift is not included, but Widerun is also compatible with external screens and as with a normal turbo trainer, it will work with pretty much any bike.