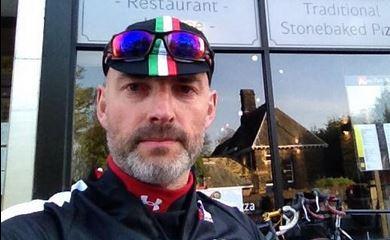 Officers seek driver of red car who may have valuable information over 44-year-old cycling coach's death...
by Simon_MacMichael

North Yorkshire Police are appealing for the driver of a red car to come forward and help with their investigation into the death of cyclist Craig Armitage in February. They believe the motorist - not involved in the incident - may have valuable information.

The 44-year-old cycling coach was taking part in the Otley CC Reliability Ride on Sunday 15 February when he was hit by a silver Hyundai i30 on the Bolton Abbey estate.

The incident happened on the B6160 at approximately 1130am. The father-of-three, who had been riding with two other cyclists, was pronounced dead at the scene.

In a fresh appeal for more witnesses to come forward, Traffic Constable Ken Riley from Skipton Roads Policing Group, commented: "I would like to thank the large number of people who responded to our initial appeal for witnesses at the time of the incident.

“The information received as a result of those witnesses contacting us has been vital to our investigation.

"However, we are now particularly interested in speaking to the driver of a red car seen in the area close to the scene of the incident, and I am urging them to come forward as they may have information relevant to the investigation."

A witness had spotted the car near the archway on the main road on the estate, and it is believed it would have passed the scene of the fatal incident shortly before it happened, meaning the driver may not be aware of the significance of anything they might have seen.

"Were you driving a red vehicle through the Bolton Abbey estate on Sunday 15 February, at around 11.30am?” asked Traffic Constable Riley. “If so, please contact me, as you may be able to help our investigation."
Anyone with information is asked to contact North Yorkshire Police on 101, selecting option 2, and asking for Traffic Constable Ken Riley or Skipton Roads Policing Group.7
Information can also be emailed to kenneth.riley [at] northyorkshire.pnn.police.uk, in both cases quoting reference number 12150025569.
A week after Mr Armitage’s death, 200 cyclists – including his father, aged in his 70s – rode in tribute to him.

His friend and business partner Jonathan Farnbay said: “It was absolutely what Craig would have wanted.

“Craig touched the lives of so many people and the turnout was a testament to him.

“He was dedicated to promoting cycling as a lifestyle choice and something all the family can get involved with. He believed in the power of cycling in bringing people together.

“Craig would not have wanted a black cloud over cycling.

“We don’t know what happened on the road that day, this was about celebrating a life and a love of cycling,” he added.