Incoming! Everyone loves a new Shimano groupset, right? And you were probably counting off on your fingers what was most due an update. And give yourself a slap on the back if you worked out it was fourth-tier Tiagra that's next in line for a brush-up and polish. Or, in this case, quite a lot more than that.

When Shimano 105 went 11-speed and double only last time around it moved it very firmly into the racing/fast riding sphere where before it was very much on the watershed between that and touring, commuting and the like. So what's happened with the new Tiagra release? Well, lots. But the headlines are that it's still 10-speed and there's still triple and flat bar options, but there's a lot of trickle-down from the dearer groupsets too. What's immediately obvious is that Tiagra has adopted the four-arm chainset design that has made its way down all the way from Dura Ace. Shimano have ditched the 53/39 as a standard option, opting instead for the mid-compact 52/36 and the 50/34 standard compact. What's different about the Tiagra chainset however is that it's also available as a 50/39/30 triple as well, which will please the many advocates of the triple; there's still plenty who'd prefer one over a compact double. The inner ring bolts on to the middle ring, and then both are attached to the spider. So there's no second bolt circle in the spider. 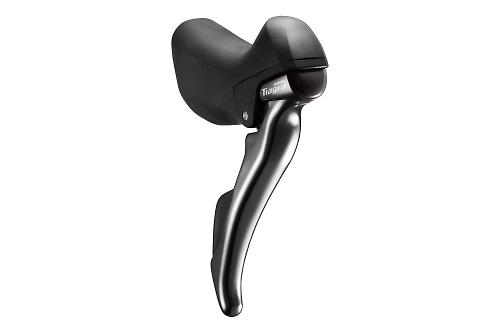 The design of the shifters is also very much like the more expensive groupsets. The neat under-tape cable routing is new for Tiagra, which until now had the gear cables exiting from the side of the lever. The new lever doesn't appear to carry over the gear indicator window, which some users may miss. 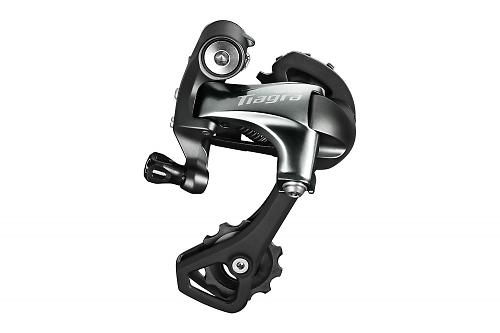 Derailleur-wise there are two options, a short cage and a mid cage. The short cage should see you right up to a 28T sprocket on the back, whereas the mid cage is good for anything up to a 34T. That's great news if you're planning a touring setup as the triple and wide cassette would give you a 23" gear on a 700c wheel which should be low enough for most loads and hills. That's assuming the mid-cage mech has enough capacity for that setup; we'll check. The derailleurs, again, move towards the look of the more expensive groupsets. The cable pitch on the rear has been revised, and Shimano say it "offers precise and long-lasting shifting performance". But then they would. The front is redesigned too, with double and triple chainset versions available. The brakes don't get the symmetrical pivot design of Shimano 105 and above, but Shimano say they're still a 30% improvement on the last incarnation in terms of braking power. Most likely they're a rebadged version of the last Ultegra brakeset; that's certainly what they look like. 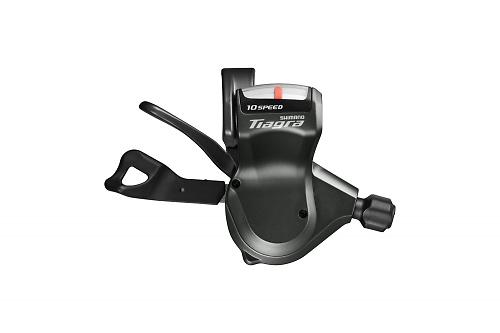 As well as the drop-bar kit, Tiagra will be available with flat bar levers and shifters. The levers look like pretty standard Shimano units and we're not sure they're much changed from previous ones. The 10-speed shifter has a gear indicator window and two-way release on the downshift: you can push or pull the downshift lever to switch gears.

Shimano say the groupset will be available in June, so we'll expect to see it on plenty of bikes come the Eurobike show in September. We don't have UK prices, or weights for any of the components as yet. When we do, we'll let you know.