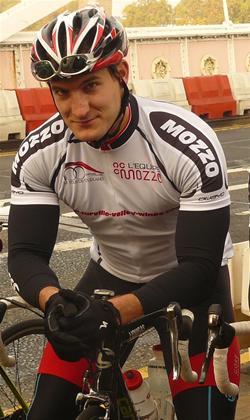 A London sportsman who had to give up a promising rugby career after a 500ft snowboarding fall has joined Lawrence Dallaglio as part of his charity Cycle Slam.

Charlie Lewis, from Hampton Hill, Middlesex, had played rugby at county level but almost lost a leg during a gap year accident in Switzerland.

His mum, Ginny, told The Hounslow Chronicle: "It was a nasty accident and he spent three years with his leg in a metal frame.

"He fell 500ft and had to be helicoptered off the mountain. It became infected. He had metal implants put in - you name it, it happened to him. We waited two years for the bone to grow back and it just didn't.

"It was so bad that at one point the surgeon said to him: 'If I were you, I'd just cut it off and get on with your life'."

His rugby career over, Charlie took up cycling after he realised it put less pressure on his leg. This week, he joined former England captain Dallaglio on the tour of all of the Six Nations international rugby union stadiums, which started in Rome last week.

Mr Lewis joined the group in France on Wednesday for stage two, which is expected to take four or five days to cover the 700km from Nice to Paris.

His mum said the family is very proud of him.

* To find out more about the Dallaglio Cycle Slam, and to sponsor Mr Lewis, visit www.justgiving.com/Charlie-Lewis