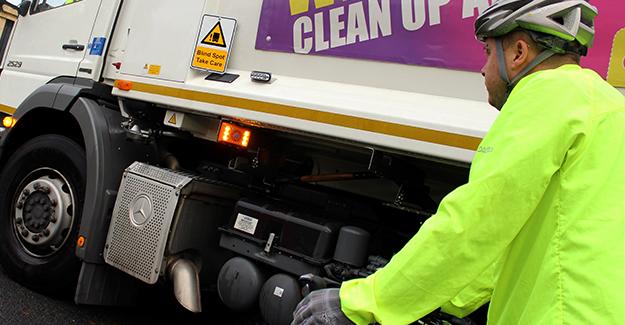 A district councillor in Lancashire has asked whether it is April Fools' Day after plans were revealed to fit its fleet of refuse lorries with warning systems designed to improve the safety of cyclists.

Hyndburn Council, which is based in Accrington, is fitting TurnAlarm warning systems to all of its vehicles involved in rubbish collection and recycling.

The council says the devices will improve the safety of cyclists by using an audible warning as well as high intensity flashing LEDs to warn them when vehicles are turning left.

All vehicles will also been fitted with 360 degree cameras to enable drivers to get a view all around the vehicle.

“Cyclist safety is extremely important to the Council and we are delighted to be the first authority in Lancashire to have this system installed across our fleet, as it will help to improve vehicle visibility and awareness for cyclists on our roads,” he said.

But the leader of the Conservative opposition on the council, Peter Britcliffe, told the Lancashire Telegraph: “If I did not know any better I would think it’s April 1.

“I am surprised this was deemed necessary and I would ask how many cyclists have been crushed in Hyndburn in the last 12 months.

“Is there a reason to do this? Is it a problem that’s getting worse?”

The council’s leader, Miles Parkinson, responded: “This is something that is an additional improvement to health and safety.

“It will make cyclists clearly aware that the vehicles are going to turn and it will clamp down on spurious claims against the council.

“It’s all about health and safety and we are one of the first in the country,” he added.

Left-turning bin lorries have been involved in the deaths of a number of cyclists around the country in recent years, including those of 32-year-old Craig Newton in Edinburgh in 2011 and 22-year-old Tsk Fok in Oxford in 2007.

In November last year Veolia, which operates one of the largest waste management fleets in the UK, signed a £1 million contract with Vision Techniques, developer of TurnAgain, to install the system on its vehicles.

At the time, John Matthews, Veolia fleet director, said “By launching this initiative now we are putting the onus on accident prevention.

“We believe there will be an enforcement of a minimum cyclist standard for fleet operators in London and around the UK and these measures reflect the need to promote safety in a demanding operating environment.”