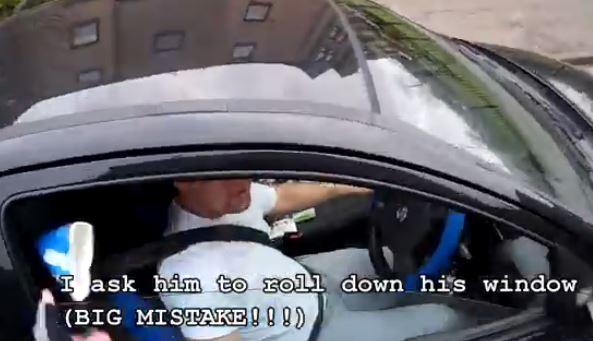 Video: Cyclist who chased after driver to return litter to him gets challenged to a fight

A cyclist in Scotland who returned a soft drink cup to a man who had thrown it out of his car window got more than he bargained for when the driver got out and challenged him to a fight. But police told him they wouldn’t be charging the motorist with assault – because they considered the cyclist himself to be the instigator.

The incident, which has been reported on mainstream media outlets including Mail Online, was posted to YouTube by the cyclist under the user name LPDman.

The footage shows him picking up a discarded KFC Pepsi cup that he believed to have been thrown out of the window of a black Vauxhall Corsa car on Alclutha Avenue in Dumbarton, although he admits he didn’t actually see the driver drop it.

The bike rider turns  round and chases after the driver, catching up with him on Crossler Road just after the four minute point in the video and asks him to wind down the window – admitting, in the caption, that his request was a “big mistake.”

Once the motorist winds the window down, the bike rider throws the cup into the car, with the words, “Here’s your stupid litter back.”

The driver gets out of his car and runs after the cyclist, saying to him, “Do you think your smart or something?” and asking him to get off his bike.

As the cyclist, who seems shaken, heads back in the direction he came from along the pavement, the driver reappears having turned his car around and asks him if he’d like to go to a nearby park “for a square go,” a request the bike rider declines with the words, “I’d rather not, mate.”

The motorist throws the cup back out of the car before turning around and speeding off, with the cyclist riding away saying to himself, “That was close!”

In the YouTube description to the video, he says: “Yes, go ahead and say I took a big risk on my physical life because I accept my life could have been taken but I personally feel this twit needs to learn a lesson in respecting the environment.

He later added: “Two police officers visited my house and said to me that although the man should not have came out of his car & attempted to assault me (resulting in a charge of Breach of the Peace), I was found to have been the instigator. In fact, throwing litter back to litter louts in revenge counts as COMMON ASSAULT.”

If that sounds harsh, it’s worth considering that under Scots case law, common assault “may be constituted by threatening gestures sufficient to produce alarm.”

While the driver getting out of the car and confronting the cyclist could clearly be construed in that way, lawyers might argue that chasing after a car for four minutes, then asking the motorist to wind the windscreen down before throwing an object at them could be, too.

What do you think? Was the cyclist right to go after the motorist and return the cup to him – or should he just have left well alone and perhaps just picked it up and deposited it in the nearest litter bin? Let us know in the comments below.