Team Giant-Alpecin’s John Degenkolb (Germany) yesterday won the 293km (182-mile) Milan-San Remo on a Propel Advanced SL, outsprinting Alexander Kristoff (Katusha) and Michael Matthews (Orica GreenEdge). Here’s one of Degenkolb’s bikes that we shot at Taipei Cycle last week – or, at least, a bike made up to look like one of his. You’ll find out why we don’t think it’s a real race bike in a mo.

Giant call the Propel Advanced SL the ‘world’s fastest aero road bike’. The frame tubes have been designed with aerodynamics in mind, so you get a very deep down tube and a seat tube that’s cut away around the leading edge of the rear wheel – both features common to many, many aero road bikes.

That seat tube incorporates an integrated seatpost that’s more aerodynamically efficient than a standard round post. Giant say that it saves weight too: about 45g compared to a standard composite seatpost. Perhaps more surprisingly, they also say that it adds a more forgiving ride feel.

The fork legs, like the frame elements, are slim and deep, and they’re home to linear pull (V-brake) brakes from Fouriers. These are lightweight and the brake arms sit out of the wind behind the fork. 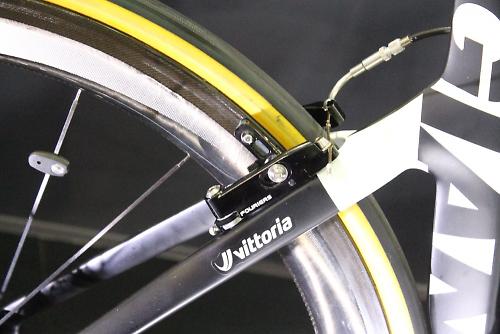 It’s a similar situation at the rear where the brake arms sit directly behind the slim seatstays. Those seatstays join the seat tube quite low, well below the top tube junction, to reduce the bike’s frontal area.

The head tube is built to Giant’s Overdrive 2 design which means that rather than traditional 1 1/8in bearings it houses a 1 1/4in bearing up top and a 1 1 /2in bearing down below. Most modern race bikes now come with oversized bearings although the exact configuration varies between manufacturers and models. The idea, of course, is to boost front end stiffness for improved sprinting and cornering.

The Propel Advanced SL also features an oversized bottom bracket. It’s 86mm wide in order to add stiffness through the centre of the bike. Asymmetric chainstays are designed to provide additional stiffness on the driveside which has to cope with all the power that’s transferred to the rear wheel. 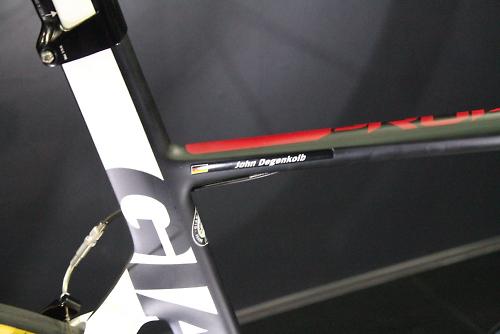 Giant say that in testing at the ACE wind tunnel in Magny-Cours, France, using a dynamic (moving) mannequin, the Propel Advanced SL proved to be more aerodynamically efficient across 0-15° of yaw than the Cervelo S5, Scott Foil, Specialized S-Works Venge and Ridley Noah Fast (go to www.giant-bicycles.com/_upload/showcases//2013/MY14_Propel_Test_Results.pdf for details of the testing).

The frame is made from what Giant call Advanced SL composite. They use T-800 raw carbon fibre and weave it in their own composite factory. Giant say that they use ‘Continuous Fiber Technology’ in the construction, using larger sections of composite material than usual. That means there are fewer junctions than normal and Giant reckon this makes things stronger and allows them to drop up to 100g.

The resin comes with Carbon Nanotube Technology (CNT). This is a microscopic polymer that is designed to strengthen the layers of composite. Giant say that frames featuring CNT are 14% more impact-resistant than those without it.

Giant give the Propel Advanced SL’s frame weight as 950g. That’s very light for an aero road bike. As a rule, aero road bikes aren’t the lightest options out there because of the extra material involved in the deeper than usual frame tubes. The fork weight is given as 380g. 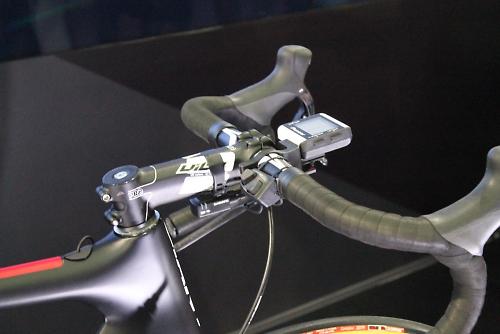 Team Giant-Alpecin use components from Shimano. Like all the other Shimano-equipped WorldTeams, they have Dura-Ace Di2 electronic shifting. As you can see, this bike is fitted with a climbing satellite shifter that Degenkolb to change gear while riding with his hands on the bar tops.

The eagle-eyed among you might have spotted one component here that’s not usually found on the bikes of professional riders, and that’s the compact chainset. It’s not unheard of for pros to use compacts in certain mountainous conditions, but it’s far from the norm.

Team Giant-Alpecin use powermeters from Pioneer while the wheels are Shimano C50s shod with Vittoria Corsa Evo CX tyres.

The remaining components come from Shimano’s in-house Pro brand. The Vibe stem is long, as is usually the case with pro riders. It’s at least 140mm, maybe 150.

One other tech feature worth mentioning is that Degenkolb was yesterday wearing a new Giant aero road helmet that will be available to buy later this year. Ever more helmet brands are offering road helmets designed for aerodynamics as teams look for an edge against their competitors.