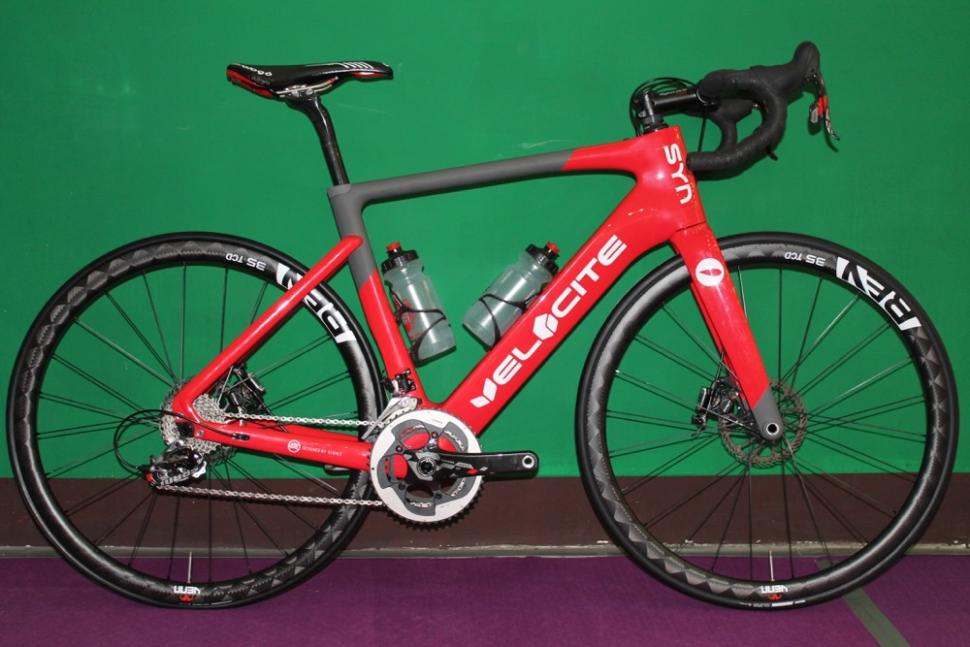 Victor Major, Velocite’s main man and the designer of the Syn, says that the bike is all about performance with aesthetic considerations not even a small part of the mix. 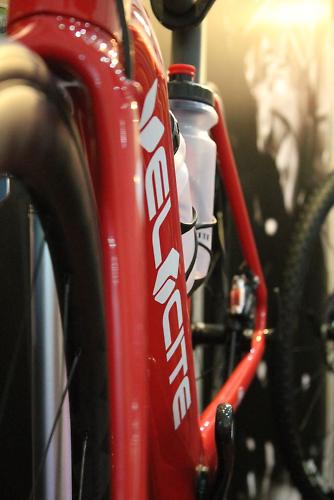 The down tube is 68mm across, the same as the bottom bracket, and it is shaped for aerodynamics. Look at the bike from head on and you can just see the sides of a (74mm diameter) water bottle extending out from either side of the down tube. 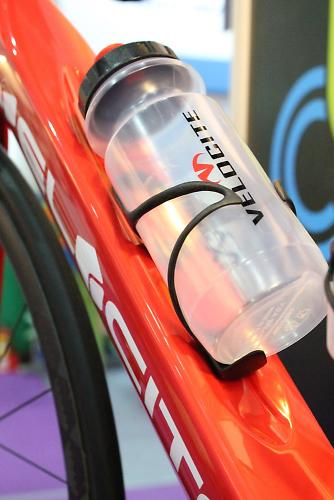 The idea is that the water bottle is integrated into the airfoil; rather than being shielded by that mighty down tube, it works with it to manage the aerodynamics. In order to do this, the rear of the down tube has been scooped out so that the bottle cages are recessed into the frame. Velocite say that the head tube has been optimised for laminar airflow and all the other frame elements have similarly been designed for aerodynamics and stiffness. Comfort comes courtesy of a slim 27.2mm diameter seatpost. 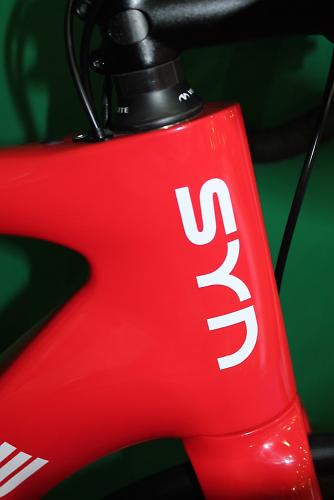 As you can see, this Syn is fitted with disc brakes and this is the version that’ll go on sale first, probably in about three months. A rim brake model will follow. 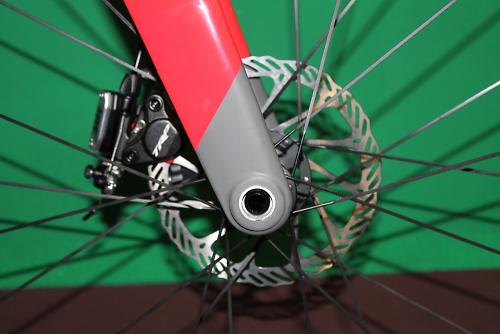 Velocite promise aggressive pricing for the Syn, comparable to that of the Giant Propel or the Cannondale Synapse. 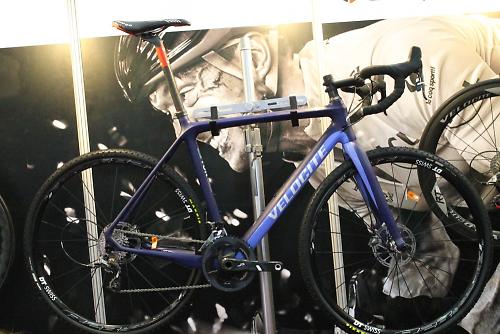 The other new bike from Velocite is the Tor. These pics don’t do it justice but that’s shows for you. Velocite say it’s suitable for ‘dirt, road, whatever’. You can use it to race cyclocross if you like. It’s made from unidirectional high modulus blend carbon fibre composite and comes with a tapered head tube (1 1/8in at the top, 1 1/2in at the bottom). You get clearance for 42mm tyres. 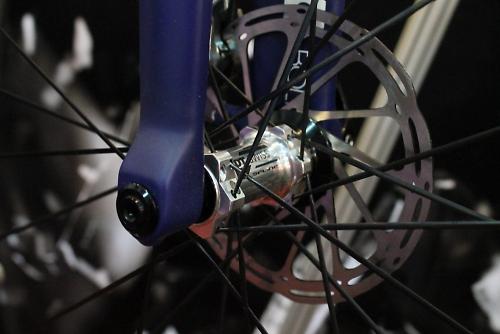 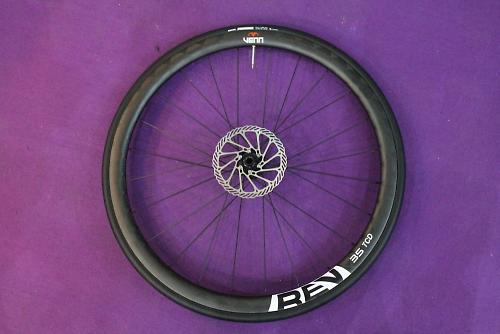 Velocite have also very recently developed new wheel technology – or, rather, they’ve introduced existing technology into the wheel market for the first time with their Venn brand.

Unlike other wheels out there, the Venn Rev 35 wheels use a filament winding technique. Huh? Velocite explain it like this: “In filament winding, a continuous tow of fibres is passed through a bath of resin and wound onto a revolving mandrel by traversing longitudinally along the axis of the rotating mandrel. 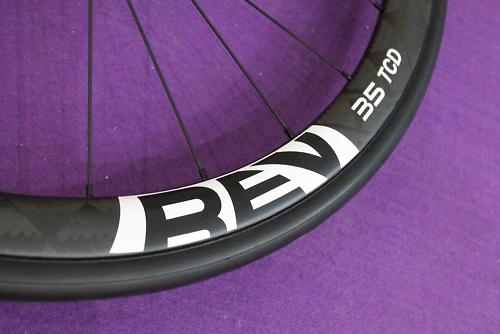 “This results in optimal, continuous fibre placement under tension, the benefits of which are higher manufacturing uniformity, better performance and greater durability.”

Velocite say that most of the major wheel manufacturers have been interested in the technique which is used for manufacturing tubular components in the aerospace industry, for example.

It’s an automated process that doesn’t rely on people laying up carbon fibre correctly, and there’s no chance of any crimping. 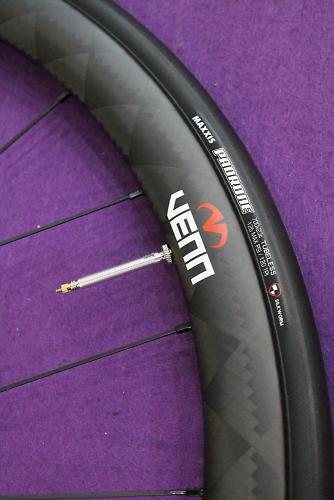 The rims of the Venn Rev 35 wheels are 35mm deep and 28mm wide. They’re available for clinchers (with tubeless compatibility), both rim and disc brake versions, and as tubulars.

Another interesting wheel from the range is the cyclocross-specific Venn Alter. This one doesn’t use the filament winding technique but continuous tangent layup (CT 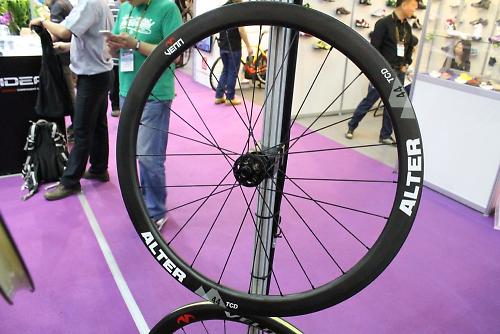 Rather than using individual segments of prepreg carbon fibre to make the rim, Velocite say that they lay it up using a special tool and process to achieve a single-piece toroidal shape. How do they do that? It’s a secret. And what’s the benefit?

“Each preform follows a continuous tangential relationship to the rim’s circumference thus ensuring that the forces acting on the rim are always evenly distributed across all the plies and individual carbon fibres,” according to Velocite. 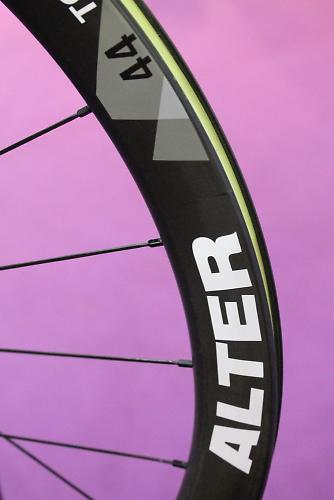 Velocite have abandoned aerodynamics with the Alter rim; they don’t see the point when a large cyclocross tyre is going to be fitted. Instead, they’ve gone for flat walls and a high strength 44mm deep x 26mm wide profile. It’s available in both disc brake and clincher (tubeless compatible) versions.