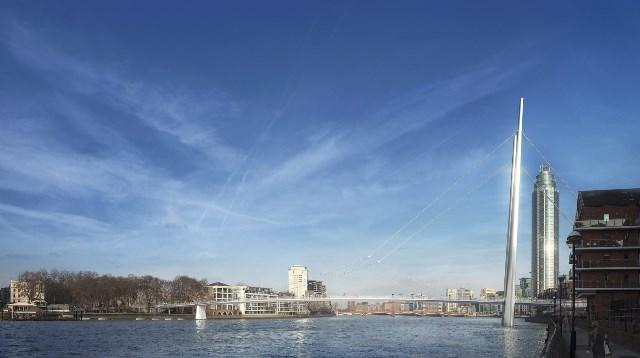 More than 70 entries whittled down to a final four, with winner to be chosen in the autumn
by Simon_MacMichael

More than 70 submissions for the design of a cycling and pedestrian bridge linking Nine Elms and Pimlico in south west London have been whittled down to a shortlist of just four, announced this week.

Unlike the controversial Garden Bridge further upstream between Temple and the South Bank championed by actress Joanna Lumley, the one planned by Wandsworth Borough Council is intended to be a transport route, rather than a tourist attraction.

The initial designs revealed last month were deliberately kept anonymous to give up-and-coming engineers and architects a chance to compete for the winning design - but the firms behind the four announced today are all hard-hitters in their field.

Civil engineers Ove Arup lead two of the projects - one in collaboration with Hopkins Architects, desigers of the velodrome at the Lee Valley VeloPark, used in the London 2012 Olympic & Paralympic Games. 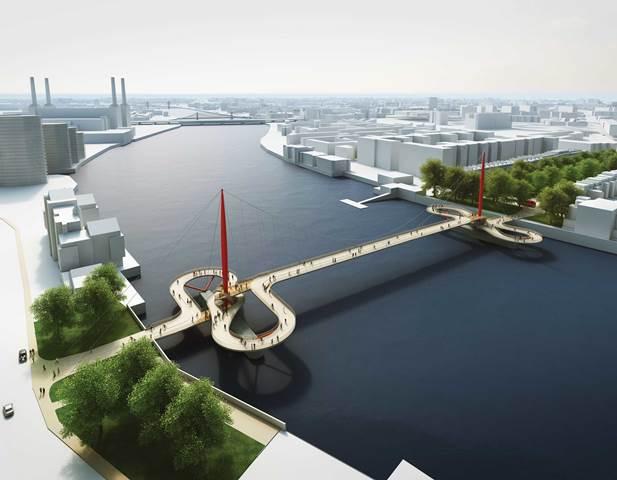 Bath-based Buro Happold also made the shortlist, and has previously been involved in major projects in the capital including the Millennium Dome and its remodelling as the O2 Arena, the replica of Shakespeare's Globe, and Arsenal FC's Emirates Stadium.

The fourth design is led by Bystrup Architecture Design and Engineering, which has a wealth of experience in pedestrian and cyclist-friendly bridge design in its home country Denmark and elsewhere.

Wandsworth Council says it expects to announce the winning design, which would have to undergo a detailed design phase as well as go through the planning process ahead of construction, this autumn.

A study by Transport for London has found that there is a strong transport case for the bridge in terms of providing a new crossing over the Thames and supporting the city’s target of encouraging sustainable transport to reduce emissions.

Councillor Govindia said: “I want to thank the jury panel and all of the designers who took part and made this such an exciting process. The quality of the submissions went beyond our best expectations and the interest this competition has generated across London has been tremendous.

“Congratulations to our shortlisted teams and I look forward to seeing their initial ideas developed further. The devil will be in the detail and the next stage will show us whether these four highly skilled and innovative design teams can meet the complex challenges this project presents.”