Polar has launched its first dedicated GPS cycling computer in the new V650, which boasts a large 2.8in colour touch screen, 10-hour battery life and Bluetooth Smart connectivity. It costs £174.50 on its own, or £209.50 with a heart rate sensor.

Polar was the first company to market a wireless heart rate monitor many years ago. At one time, its heart rate monitors, during a period when cyclists were just starting to embrace the idea of training with heart rate, were a ubiquitous sight on the handlebars of cyclists everywhere. In recent years though we’ve seen the rise of GPS enabled cycling computers, a market mostly dominated by Garmin, but there’s an increasing array of choice, including the new Lezyne range. The V650 is Polar’s response. 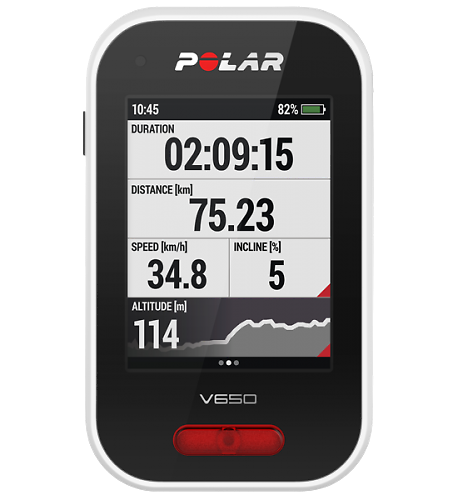 The new V650 is its first handlebar mounted cycling computer utilising GPS, after it brought us the multisport V800 and M400. The large colour screen is housed in a light 120g case, and that display provides all the typical data such as speed, distance, cadence, plus your route. A barometric pressure sensor provides altitude data, and the V650 can display real time VAM (Vertical Altitude Metre) The display can be customised and different bike profiles can be created if you want to swap it from your road bike to your time trial bike, for example. It looks to use a similar quarter-turn mount to a Garmin, but according to report, isn’t actually compatible with Garmin aftermarket mounts. Bluetooth Smart allows the pairing of compatible heart rate and cadence sensors, but a lack of ANT+ does mean it can’t be paired with most power meters. There are some power meters, like Stages, that utilise Bluetooth, so all isn’t lost, and many companies are embracing Bluetooth Smart as the standard. There’s also the Wahoo Kickr as well for indoor training.

Charging and data transfer ro to your computer is via a micro USB cable. Rides can be uploaded to Polar Flow, the company’s own service that provides analysis of your ride.

Lauri Lumme, the designer of Polar V650 said: “We are honoured to be recognised with our design work in relation to the evaluation criteria such as design quality, finish, functionality, safety, degree of innovation and universal design. The V650 has been engineered and designed to make it the highest quality product of its kind.”

We’re getting one in for review soon so we can put it through the test mill. More at www.polar.com/uk-en