Founded in Toronto in 2012, with frames handmade in New York, No.22 Bicycle Company used the recent North American Handmade Bicycle Show to unveil its new Reactor, a titanium frameset with an integrated carbon fibre seatmast that, in the show build pictured here, weighs a claimed 13.1lb (5.94kg). The Reactor is pitched as a race-focused bike, in comparison with the company’s existing Great Divide model, its first debut at launch three years ago and more of an all-rounder suitable for sportives and clubruns.

“During the development process of the Reactor, we scrutinised every element of the frame to deliver on the light, stiff and durable demands of a race focused bike,” says the company. “The end result is a frame with the stiffness and ride quality expected from a top tier titanium frame, at a weight of only 13.1lbs complete as shown.” At the heart of the frame is a one-piece carbon fibre seatmast, which runs all the way from the bottom bracket shell, and sits in specially designed titanium lugs. The company says this design has allowed it to tune the ride quality, and provides additional stiffness, extra vibration damping and lowers the weight. This seatmast is topped with a bespoke cast titanium one-bolt seatclamp. It’s worth noting that the extended seatmast can be cut off and removed entirely, and replaced with a conventional 30.9mm seatpost and clamp. Around that carbon seatmast is built a titanium frame using 3AL/2.5V tubes. As it’s a race-focused model, the Reactor has plenty of oversizing going on. It looks purposeful, more so than the Great Divide. The Reactor is intended to provide maximum power transfer for hard efforts and racing, yet retain the smoothness of titanium. The chainstays in particular are a massive 25.4mm in diameter, and ovalised to 30mm at the bottom bracket shell, to provide optimum power transfer.

Yet as is in keeping with most modern race frames, the seatstays are skinny in comparison, the idea being to provide some amount of comfort. They measure just 13mm in diameter. The dropouts are a custom hood-style design, to accommodate the big chainstays. Despite all this oversizing, the frame still has clearance for 28mm tyres. 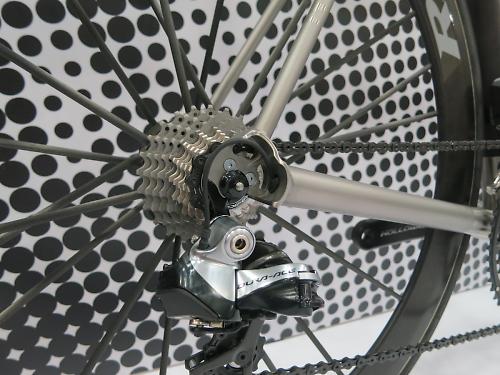 The Reactor frame sports a new head tube with an external tapered design, with an integrated headset, the bearings sitting directly into the head tube. This oversized head tube allows the use of a fork with a tapered  1 1/4in steerer tube. The company’s usual solid titanium head badge has been replaced by a CNC engraved headbadge, to help save a few grams of weight. The bottom bracket continues the oversized theme, and is a 68mm PressFit30.

As the show build at NAHBS demonstrates, a light build is possible if you have some cash to throw at the build kit. A naked 54cm frame weighs a claimed 1,370g, which while it won’t trouble a carbon fibre frame, is a competitive weight for a mostly titanium frameset. Each size frame, and the company offers a full range of stock sizes, has size-specific butting and tubing sizes.

No.22 Bicycle Company prides itself on “bringing titanium frames into the modern era” with all frames built in-house, will all the frames offered in a full range of stock sizes.

“No. 22 Bicycle Company was born out of a desire to strike equilibrium between enjoyment and performance. We build bicycles for the rider who appreciates perfectly tuned ride quality as much as stiffness and low weight—the rider who loves to ride for ridings sake,” adds the company.

The Reactor frameset (including hardware and seat clamp) is available now and costs $3,999. A frame kit with a 3T Rigida LTD fork, 3T Aerotundo LTD handlebar, 3T ARX II Team stem and Cane Creek AER II headset can be had for $5,199.

The pictured bike, on show at NAHBS 2015, weighs a claimed 13.1lb courtesy of a Shimano Dura-Ace Di2 groupset and some very expensive parts, including the Reynolds RZR 46 wheels, eeBrakes, Fabric saddle and a Cannondale SiSL2 chainset. It’s a size 56cm frame in the pictures.