PowerTap, the company behind the popular hub-based power meter, looks set to launch two new crank and pedal-based power meters, judging by a ‘teaser’ video released on YouTube this week. The video doesn’t give much away, but the two screengrabs we pulled from the video clearly show PowerTap branded pedals and a chainset.

The pedal looks vaguely like a Look-style design but with an extra lump at the rear, and a wider axle body where it meets the crank arm. We’d presume the extra bulges account for the sensors and batteries. 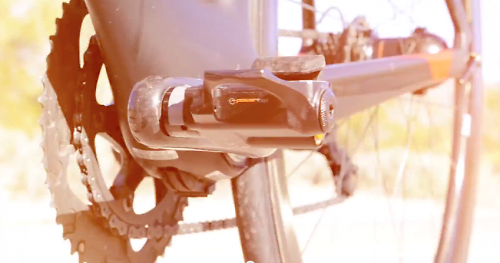 The crank-based power meter is interesting. It shows what appears to be a Shimano crankset with a PowerTap branded outer chainring, and an FSA inner chainring, suggesting PowerTap has partnered with FSA for its manufacturing expertise. There’s a module attached to the outer chainring, similar to the Pioneer system, which will likely house sensors and batteries for transmitting the data to a compatible head unit. It looks likely the strain gauges for the power meter are sandwiched between the crankarm and chainrings, in a special spider assembly clearly visible in the photo. This suggests it might offer compatibility with existing chainsets. 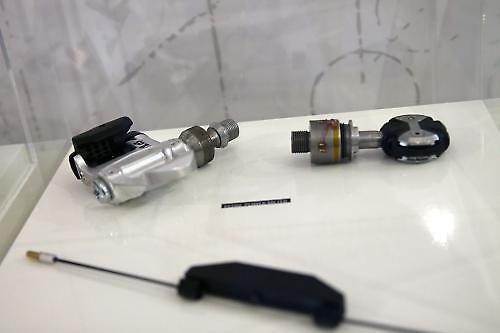 PowerTap did hint at these new products at Eurobike last September. On its stand it showed several development products, including these two pedal prototypes. When asked, PowerTap obviously wouldn’t give anything away, telling us that these were simply the results of the development team experimenting with different systems. It seems these developments are soon to come to fruition.

The industry has come a long way in just the last five years, and there’s a lot of choice in the power meter market now. Your choice if you wanted a power meter used to be between the prohibitively expensive SRM Powermeter, and the PowerTap, which has gotten ever more affordable. The market is awash with power meters now, with crank and pedal-based systems proving very popular, and prices have become more attractive to non-professional cyclists interesting in utilising power for training.

PowerTap has a lot of experience to call on, having first released the PowerTap 17 years ago. You can learn more about the brands history on its website.

We don’t know any more than that at this stage, as soon as we find out more we’ll let you know.