Australian company Knog has built up quite a following with its range of cleverly designed bicycle LED lights, and it’s now turning this expertise to other areas, with the release of the [expose] iPhone accessory light and [qudos] Action Video Light for GoPro. Yes, they're not strictly bicycle lights, but we know plenty of people regularly record and share cycle rides and adventures with a phone or video camera, as we've seen with #mycyclingweekend recently.

The [expose] smart light is shaped and styled to plug seamlessly into the bottom of an Apple iPhone and an array of LEDs provides a 130 lumen output. It’s intended to be a more powerful flash for the iPhone’s on-board camera, and will clearly appeal to enthusiastic photographers. With Bluetooth, the [expose] can be easily modified and controlled through Knog’s own app. Settings offered include flash, strobe and continuous, and adjustable brightness. The app is currently only available for iOS, but the company is working on an Android compatible version. For more creative uses, the [expose] light can be separated from the iPhone. It costs £40.

The other new product from Knog is the [qudos] Action Video Light for GoPro. The GoPro is hugely popular with action sports people but shooting in low light can prove challenging for the camera, and there’s no on-board flash to help in such situations. 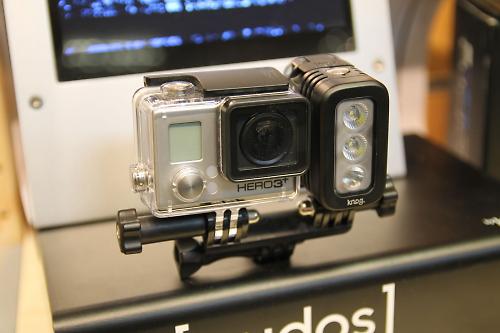 The [qudos] solves this by using Knog’s cycle light expertise to provide up to 400 lumens via three CREE LEDs, contained in a CNC machined aluminium unit (which acts as a heat sink) and mounted alongside a GoPro camera. As well as native GoPro 2-4 compatibility, it’ll also work with Sony Action Cam and Canon DSLR cameras, as it can be mounted onto a camera’s hot shoe flash bracket. It’s IP68 rated and waterproof up to 40m, weighs 150g and uses a USB rechargeable Lithium Polymer battery. There are three settings on offer, a wide angle 400 Lumen mode for action sports, an ultra wide angle and 270 lumens for ambient conditions, and a target spot with a narrow beam angle and 175 lumen output. It costs £89.99.

1
Shimano takes over Tour de France neutral support from Mavic
2
Near Miss of the Day 522: Land Rover driver in pointless close pass
3
Police investigating cyclist Tony Parsons' disappearance confirm his body has been found
4
Near Miss of the Day 521: Close pass ... by a police van (plus how it all went a bit Kafkaesque afterwards)
5
eBay seller refuses to accept bike auction offer – says "would be unhappy if I sold to Scouser"
6
Council has "no intention to enforce" parking restrictions in segregated cycle lane where cars are parked bumper to bumper
7
Fears new cycleway will lead to drunkenness, drug taking and 'naked selfies in the woods' (no, really)
8
Three Bora-Hansgrohe riders in hospital after driver crashes into training ride