Bikes with some urban style: NS Analog Fixed and the Electra Ticino

The NS Analog made it's debut at the London Cycle Show cos that's essentially what we have here - a fixed bike for doing tricks on and which will also do just fine as a bike for zipping around town on, a close up inspection shows that it possibly isn't as full on a trickster as the Identiti Persona we saw at CORE on the other hand like Identiti NS have put a lot of their experience of building jump bikes in to the Analog. It should be strong though - the jury amongst the Hotlines guys at the showcouldn't give a definitive verdict on what it is made off but the majority view was 4130 Chromoly – a view confirmed by subsequent research, it's full Tange chromoly, the same tubing NS uses for their dirt jump frames, it also uses some of the same finishing kit too. We reckoned it would be plain gauge too and that seems to be what it is – strong enough to take plenty of abuse and chucking around those tubes are suitably beefy as are the welds - although unlike the Identiti Persona there is no extra gussetting to further strengthen things up around the head and down tubes. That fork looks a nice bit of kit - strong but elegant, that's NS's work too and is the same tubing as the main frame.

Our man at the skate ramp tells us that fixed freestyle crew are starting to jump their bikes off stuff, Identiti increased the standover height by sloping the top tube on the Persona presumably for just that reason - NS haven't so either a big bar pad or a cricket box down your skinny jeans might be in order if you are putting this baby through it's paces on the ramps. 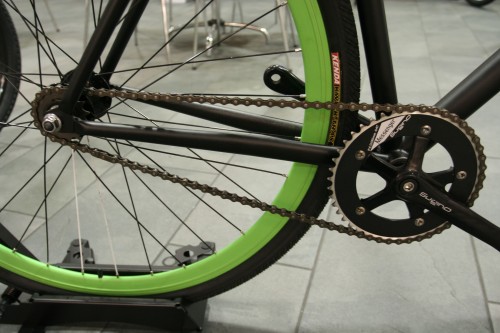 This should be one monster wheelie machine though courtesy of that super-tight looking back end and those 38c tyres – even I could probably pull one… riding up big hills will be a laugh as you try to get your weight out front. If using this as a town bike you can probably forget about fitting any type of mudguard other than of the Crudguard variety – we're guessing this won't be a major concern for the target customer. Bar spins should be on the cards too with enough clearance for the front wheel and easier to spin shorter freestyle-style riser bars – NS Mint bars cut down to 580mm matched up to one of their short Quark stems. All that said, our ramp correspondent reports that nobody is really getting very far off the ground at the moment so the lack of gussets shouldn't put you off… worry about the stand over height instead.

Other sound touches include the machined braking surfaces on those semi-deep Jalco lime green rims - so you could fit brakes and ride this is a singlespeed too - It comes with a flip flop hub to give you that option, although you will have to fit your own cog. Those large volume 38C Kenda Kwik-Trax tyres will take the sting out of heavy landings and bumpy city streets and make for a comfy ride – those wheels look reassuringly strong too. The 44-16 gearing should be good for all but the hilliest terrain.

The Analog comes in three sizes: small, medium and large – 51cm, 54cm, and 57cm top tubes chainstays are the same length on all sizes 40.5cm - so not as ridiculously short as they look, that's the effect of those beefy tyres. The seat angle is the same on all sizes too 73.5° while the head angles are 72°, 72.5° and 73.5° on the large – so all more laid back than a classic track iron.

The Analog is available as a complete bike or as a frame only – the latter also comes in yellow. Frame only price is £299.99 while prices for the complete bike are yet to be confirmed, we'd expect it to be somewhere around the £500 to £550 mark and they should be hitting our shores in numbers in April

NS are claiming an all up weight for the complete bike of 10Kg which sounds pretty reasonable. All in all this looks like a very decent city bike that you could do a bit of freestyling on too. Nice Even nicer for those who like their urban style classical rather than free is the Electra Ticino a very fine example of retro style with a modern twist or RSWMT as it will henceforth be known in these parts. I'll be honest here I've always tended to skate past Electra bikes in the past - when cruisers were in their pomp a few years back they committed some humungous fashion crimes in the name of RSWMT, it didn't stop them being big sellers in Manchester though and I've got to say the Ticino 8D is one very nice bike. 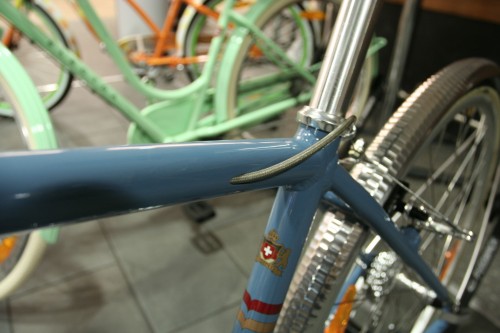 First off, it doesn't weigh half a ton, in fact the 6061 butted aluminium frame feels remarkably light when you pick it up, it's not all alumnium the elegantly raked fork is steel. There are lots of nice details too, the leather pads on the back of the mudguard struts are a nice retro touch which contrasts with the very modern routing of the rear brake cable through the top tube. Clever things are done with the cables from the brake lever which are routed through a tunnel in the grips back from the bar-end levers. 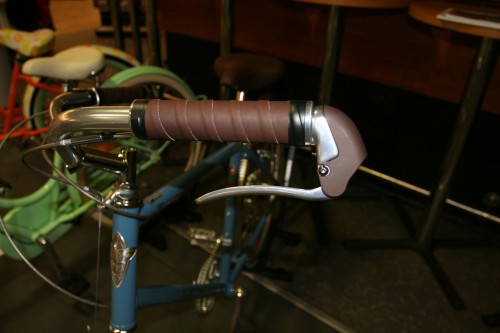 This is a proper urban machine, yes it's been built with fashion and syle in mind, but not to the exclusion of it working as an actual bike, The Ticino 8D is second bottom of the six bike Ticino range and sells for £689.99, we would be very interested in testing it's big brother the Ticino Lux - the singlespeed version, less being more in the cycling world that is more expensive at £999.99. Mind you it is made from double butted 4130 chromoly steel, and it does have a chainguard – do you really need one of those on a singlespeed? There's also a Ticino ladies range all with a stylish looking double downtube. Various modela also come with a choice of racks and either 7, 8, 16, 18, or 20 gears there's also another singlespeed option the Ticino 1 made from plain gauge chromoly.