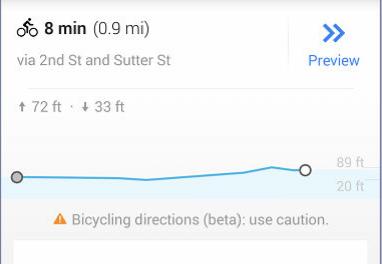 Cyclists are among the most likely Google Maps users to report problems with the maps, allowing the internet giant to adapt and improve mapping.

If a user tells Google that its directions are wrong, a team at Google’s Project Ground Truth will check out the claims and adjust the map - but it relies on feet - or wheels - on the ground.

According to the Wall Street journal, cyclists produce disproportionately more data adjustments than any other road user, and Google says cyclists are "fanatical" contributors to the system.

Using both roads and trails, it seems that cyclists might cover more, and different, ground to other users - and a mapping error can spell injury or even death for a cyclist - and at the very least a potentially lengthy detour - making them likely to report problems fast.

Unlike other road users, they can also stop and send a quick message using a phone - and many are interested in Google’s fairly new biking directions, which are as yet fairly undeveloped.

Back in 2013 we reported how the internet giant had announced that its biking directions – available in the UK since last year – had been rolled out to six new countries, France, Germany, Ireland, Liechtenstein, Luxembourg and Poland.

The feature, which was initially launched in the United States and Canada in 2010, was made available in Austria, Belgium, Denmark, Finland, Luxembourg, Monaco, the Netherlands, Norway, Sweden, Switzerland and the UK last year.

“In some countries we’ve worked with partner organisations. In others users have added hundreds of kilometres of biking paths through Google Mapmaker.”

He explained: “I am a big tennis fan, so lets say I live in Hamburg and want to head over from my house in the suburbs to a tournament.

“I am able to grab my Android phone and ask Google Maps for the directions to the stadium. Google Maps will return a route that avoids busy streets and uses suitable bike paths.

“Time estimates for the route will be based on a complex set of variables accounting for the type of road, terrain and turns over the course of my ride. I also am able to turn by turn Navigation for my bike.

“I just plug earphones into my phone, switch over to Navigation and let Google Maps guide me through the city – just as from the car.”

As for adding your own information, Hansen said: “If you know about a new bike trail, please tell us. Either use the “Report a problem” link at the bottom right of the maps screen or jump into Google MapMaker and add the information to our maps.”