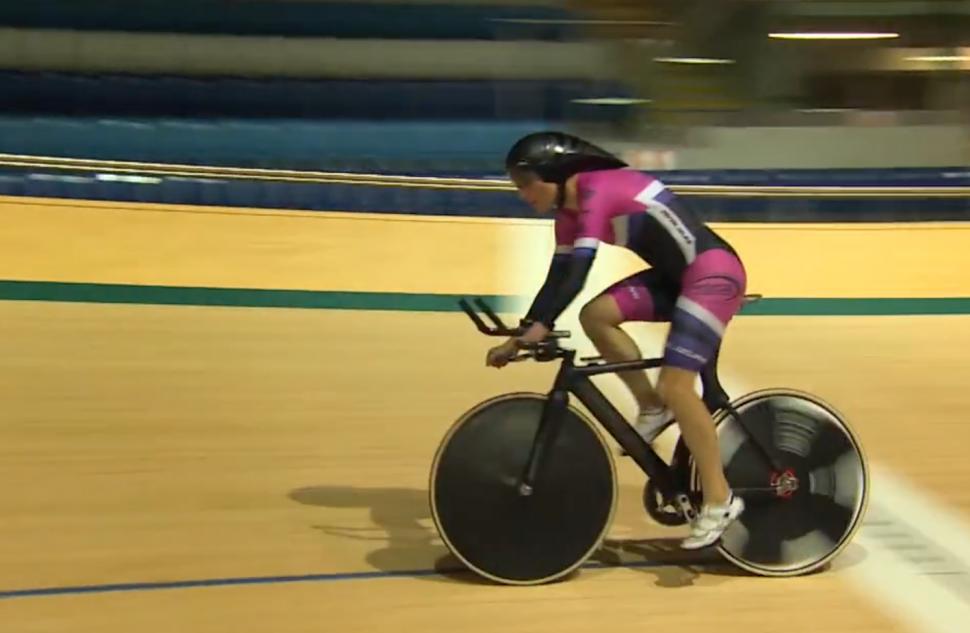 With the countdown to Saturday's women's UCI Hour Record, Storey takes time out to talk about her preparation...
by David Arthur @davearthur

Dame Sarah Storey will attempt to break the women’s UCI Hour Record in London this Saturday (28th February) as part of the Revolution series, and in this video she talks through some of the preparation involved in the attempt.

“So there hasn’t been a huge amount of track time as people might expect, but there has been some key track time that has been important to get to the Hour Record in the right technical shape.”

We’ve already covered the bike and equipment that Storey will be using for her attempt in this article. She’ll be riding a Ridley Arena Carbon Track bike with a pair of carbon disc wheels and a PRO Missile handlebar, which have been specially adapted for her left hand by Rob Hayles. The bike is fitted with a Verve Infocrank which will be recording all the important metrics like speed, cadence and power output.

Storey will dress in the same design Pearl Izumi PRO Speed Skinsuit as used by Rohan Dennis in his successful Hour Record ride a little while ago. She’ll partner that with a Lazer Wasp time trial helmet.

Well it's all down to @BarneyStorey now... Oh yeh, and a little bit of @DameSarahStorey . #hour pic.twitter.com/FnIfQX8zH4

“It’s such a pure event, such a tough challenge, and ultimately I need to know how far I personally can go in an hour,” adds Storey.

Dame Sarah Storey’s attempt at the hour record is part of a weekend of elite racing at the Revolution Series on 27-28 February with tickets from £10 to £45 available at www.cyclingrevolution.com or (0844) 8542016.

If you can't make it, fear not, the attempt will be broadcast exclusively on the UCI YouTube channel.

1
Council has "no intention to enforce" parking restrictions in segregated cycle lane where cars are parked bumper to bumper
2
Near Miss of the Day 521: Close pass ... by a police van (plus how it all went a bit Kafkaesque afterwards)
3
eBay seller refuses to accept bike auction offer – says "would be unhappy if I sold to Scouser"
4
Jeremy Vine films motorist driving down Hyde Park cycle path
5
Have your say on rat-running motorists driving through London’s Royal Parks
6
Bike at bedtime: Cotic Escapade
7
Police in Forest of Dean send group of seven mountain bikers back to Wales for lockdown rule breaches
8
Boris Johnson accused of breaking lockdown with Olympic Park bike ride – even though he did not appear to break law