Subscribe
Back to news
news
Health
Charity
Art and design

Find some Lovehoop love in London this Valentine's Day - and you could win a bike!

Love is in the air this Valentine’s Day not just for London’s cyclists but for their bicycles too with will see 14 heart-shaped ‘Lovehoops’ placed around the capital. An accompanying photo competition, meanwhile, will see someone ride away with a TokyoBike worth £490.

The cycle stands, painted an appropriately vivid shade of red, are the work of Hackney-based artist, Graham McLoughlin. He has teamed up with Cyclehoop and the British Heart Foundation for the initiative which not only celebrates cycling in the city, but also aims to raise awareness of the charity’s work.

Each hoop has a sticker that reads “Share the love by making a donation to the British Heart Foundation — all you need to do is text ‘LNDN86 £5’ to 70070.”

Cyclehoop founder Anthony Lau said: “We love designing funky street furniture and when Graham approached me asking if we could come up with a heart shaped Cyclehoop bike rack, I was more than happy to help.

“It seemed like a great creative opportunity to put a smile on someone’s face, and promote the love of cycling whilst providing more secure bike parking in the city. All of this whilst supporting a charity we are passionate for!” 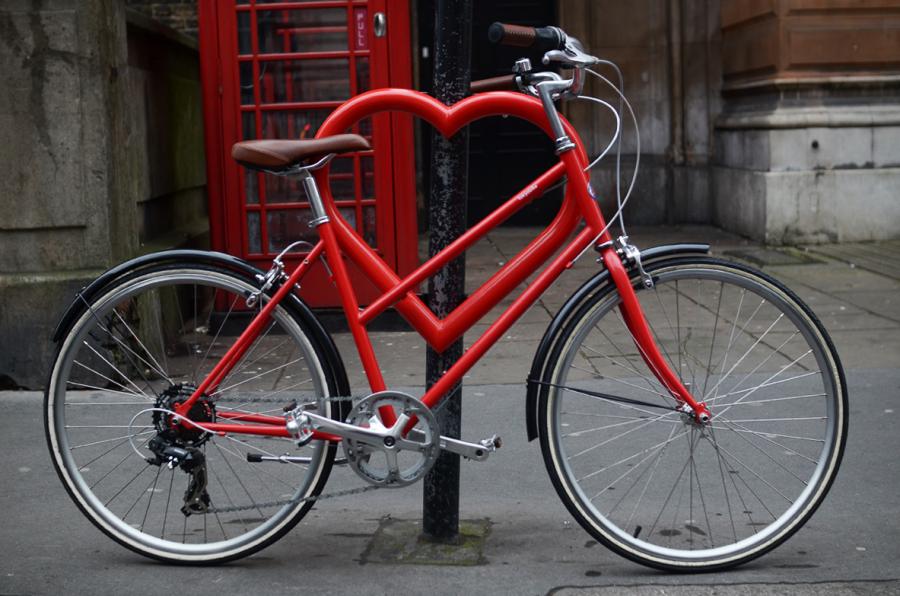 Painted in Kent and manufactured within an hour of London, McLaughlin has installed them at 14 locations in the city centre.

The project is accompanied by a competition with prizes including a brand new Cherry Red TokyoBike worth £490, CycleHoop Bikeshelves worth £80, luggage from Brooks and a Borough briefcase.

People can enter as many times as they like – simply take a picture of a Lovehoop, upload it to Instagram with the hashtag #HeartsOfLondon, and that’s it.

The winning images will be chosen at the end of February and there is also a Bikeshelf up for grabs for the first person to locate and snap all 14 LoveHoops and share them on social media with the tags tag #HeartsOfLondon @cyclehoop.

First produced in 2006, the Cyclehoop turns street furniture such as lamp posts into secure cycle parking and so far has led to more than 6,000 spaces being created for London’s cyclists to lock their bikes.