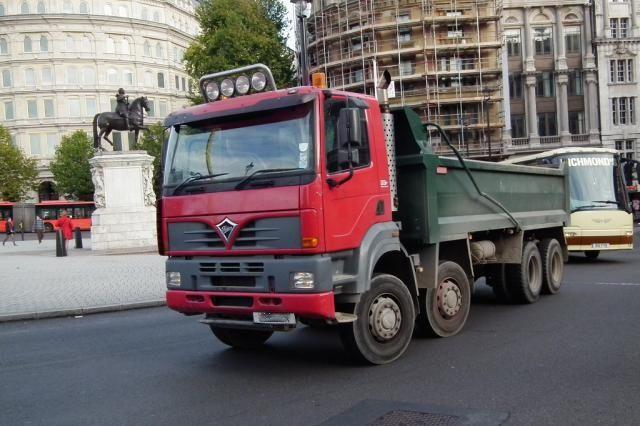 Mayor, TfL and London boroughs combine to clamp down on lorries that pose greatest danger to vulnerable road users
by Tony Farrelly

Lorries of more than 3.5 tonnes not fitted with side guards and mirrors that give the driver the best view possible of cyclists and pedestrians around their vehicle will be banned from the London’s streets when the capital’s Safer Lorry Scheme comes into force this September. TfL made the announcement yesterday following a public consultation in which 90 per cent of respondents were in favour of the scheme.

The scheme is a further ratcheting up of measures by TfL and Mayor Boris Johnson to do something about the number of cyclists and pedestrians being killed and seriously injured on London’s streets by heavy goods vehicles - and construction lorries in particular.

Last year the Mayor and TfL committed to a six point road safety plan which included cutting death and serious injuries on London's roads by 40 per cent by 2020 and to cutting deaths and serious injuries amongst vulnerable road users: pedestrians, cyclists, and motorcyclists, who together make up 80 per cent of those killed or seriously injured on the capital's streets.

In 2013 nine of the 14 cyclists killed in Greater London died in collisions with lorries, and lorries have historically accounted for a disproportionate number of cycling and pedestrian casualties for their overall number on the road. Earlier this week a cyclist was killed in Homerton High Street in a collision with a left turning tipper truck.

While lorries are disproportionately more dangerous than other vehicles, construction lorries are disproportionately more dangerous than any other type of lorry. So while the statement announcing the new scheme doesn’t explicitly say so, these new measures will particularly target construction lorries such as tipper trucks and skip lorries.

That’s because most heavy goods vehicles (HGVs) are already required to fit side guards - lorries involved in the construction industry are exempt from that requirement. All older HGVs including older construction lorries are also exempt from the requirement to fit extended view mirrors - new lorries already have to have them fitted.

Both the Mayor and TfL have come in for heavy criticism from cyclists and safety campaigners for encouraging more people to cycle in the capital without providing adequate infrastructure for them to do so safely.

Last year saw record numbers of cyclists on the capital’s streets and that growth shows no signs of stopping. At the same time a number of major infrastructure projects are also likely to lead to a dramatic rise in the amount of construction traffic using those same streets in the coming years.

Following a series of deaths the Mayor and TfL have moved to make the city’s streets safer for cyclists by announcing plans to reconfigure 33 of the capital’s most dangerous junctions, providing a network of Quietways, and more segregated cycle routes. Last week the Mayor gave the go-ahead for two largely segregated Cycle Superhighways that will bisect London, a move this week rubber stamped by the TfL board.

At the same time there has also been a renewed focus on lorry safety. One early sign of this was the Mayor’s reversal of his decision to disband the Metropolitan Police’s specialist lorry safety unit and the subsequent creation of the Industrial HGV Taskforce funded by TfL and the Department for Transport (DfT) and formed of the Metropolitan Police Service, the Driver and Vehicle Standards Agency (DVSA) and the City of London Police.

The Safer Lorry Scheme will cover every road in all of Greater London’s 32 boroughs and teh City of London, except for motorways, and will come into force on 1 September, as soon as the 600 warning signs on roads leading into the Safer Lorry Zone are in place.

TfL say the scheme will be permanently in force 24 hours a day, 7 days a week. It will be enforced by the police the DVSA and the joint TfL and DfT-funded Industrial HGV Taskforce (IHTF).

The maximum fine for each breach of the ban will be £1,000 - on the assumption that failure to fit side guards and the appropriate mirrors will be regarded as separate breaches of the ban this means operators could face fines of up to £3,000 for one vehicle.

As well as being fined, operators breaching the ban will also be referred for consideration to the relevant Traffic Commissioner, who is responsible for the licensing and regulation of HGV operators.

Commenting on the decision to implement the scheme, Mr Johnson, said: “Improving the safety of London’s roads is a top priority. We know that a large number of cyclist deaths and serious injuries involve a relatively small number of trucks and lorries that are not fitted with basic safety equipment.

Such vehicles are not welcome in the capital and the Safer Lorry Scheme will see them effectively banned from our streets. The lives of thousands of cyclists and pedestrians will be much safer as a result and I urge all operators of HGVs to get on board and make it a success.”

While the Safer Lorry Scheme undoubtedly represents a major step forward when it comes to the safety of cyclists and other vulnerable road users on London's roads, the Mayor and TfL will still have some work to do if they are to meet their ambitious target for reducing the most serious casualties by 2020.

Attention is now likely to focus on London's buses which TfL's own figures last year revealed to be even more dangerous to cyclists and pedestrians - per kilometre travelled - than heavy good vehicles.